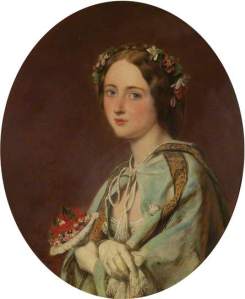 It may be mentioned as illustrating still further, the false tendencies in music, that it takes a brave man to ask for a sweet, simple song. I tried it the other night. I asked a Flora McFlimsey to give us “Way down upon the Swanee River.” The words, it will be remembered, are singularly pure, sweet and pathetic.

Many of the Italian songs just now so fashionable, are couched in language, listened to by pure-minded people, only because they don’t understand it.

When I said, “Please sing ‘Way down upon the Swanee River,'” Miss McFlimsey replied, “Excuse me, I never sing that class of music. I haven’t sung one of those simple airs, I don’t know when.” I know, by the way the girls looked at me, that their respect for my musical taste vanished at once and forever. If I had asked her for “Ah, que faime les militaire,” or “Une Poule sur la mur,” insufferable trash, both as to music and words, utterly beneath contempt, she would have eagerly screamed the bald bosh, and the weak ones would have declared it ineffably exquisite.

[Since the above was in type, Mile. Nilsson has several times sung “Way down upon the Swanee River” at her concerts.]

If you understand Italian, I need not explain; and if you do not, purchase a libretto, with English translation, of almost any of the operas, and read.

Among those most popular on the American stage, I cannot recall more than two, that I should be willing to have my daughter read. But the music pupil must study every word, often every syllable of a word.

The lascivious suggestion, the sly inuendo, the bold challenge, — they are all exhausted in the language of the opera.

One of the charms of much of this class of music is similar to that of a new dance introduced into this country last winter; and it came, too, from the land of Italian opera. Of this dance I will only say that I overheard a buxom lass telling her lady friends “that the new dance was perfectly glorious; but,” said she, “it’s of no use to put flowers or bows in your bosom, for they get pressed flat enough, long before the first dance is over.”

Is it not a simple fact that operatic songs are popular just in proportion as they are indelicate? I have asked this question of more than a score of devotees of the opera. Half of them, perhaps, have said yes, the other half have said that the finest music happened to be associated with naughty words. Read the words of “Un mari sage” without the music. Where, outside of a brothel, could there be found a company of girls, who, with men present, would keep their faces uncovered, and listen.

I wish you would go to the opera with me; I will show you something which will impress you more deeply than any words I can write.

Here we are, so placed, that we can look into the faces of a part of the audience. Let us select a couple, and, with our glasses, watch them.

There is a beautiful black-eyed girl, — the one with that fat, red-faced gentleman. She is about sixteen, and he about thirty. I know him. He is a regular roué, although he has the entree of many of our best homes. His companion seems a modest, sweet girl.

The opera is “Faust,” one of the most unclean of the whole unclean batch.

They are both using one and the same libretto, with an English translation. This gives him an opportunity to put his arm behind her, but of course he is careful not to touch her shoulder. But we shall see, when we come to certain parts of the opera.

Now look at them. See the red spots on her cheeks; they tell us of struggling modesty and innocence. The story proceeds; the lascivious gestures, the lecherous gaze of the men and half-naked women on the stage, are beginning to tell upon the whole audience. See our girl. That arm is pressing her against his side, and her eyes are busy with the words, as if she were completely absorbed. When she returns to her home to-night, her mind will be filled with thoughts, of which she will not speak to her mother.

God alone knows the number of pure souls that have been ruined by the insidious poison of the opera.

Mrs Daffodil’s Aide-memoire: “Dio Lewis” was “Dr.” Diocletian Lewis [1823-1886], homeopathic physician, educator, temperance and physical culture advocate. He ran several schools and has the dubious distinction of having invented the “beanbag.” The articles in Our Girls, on such subjects as purity, deep breathing, and hygiene were taken from his popular lecture tour. A “Flora McFlimsey” was a young lady obsessed with fashion and appearances. She first appeared in 1857 in a poem called “Nothing to Wear,” a satire on New York society extravagance.

Un mari sage, “A Husband Wise,” is from La belle Heĺeǹe by Jacques Offenbach. The song suggests that a prudent husband, returning from a trip abroad, will give advance notice of his advent so there are no unpleasant surprises. “Eprouve du désagrément.”

“Ah, que faime les militaire,” (“Oh, how I love the military!”) is from La Grande-Duchesse de Gérolstein, also by Offenbach. The soprano sings of her love of all soldiers: their smart uniforms, moustaches, and plumes and of how she longs to be a camp-follower.

“Une Poule sur la mur,” “A Hen on the Wall” is a French song, supposedly for children, but with slightly suggestive lyrics

Faust, of course, tells of the seduction and betrayal of the innocent Marguerite.

One rather sees what Dr Lewis was driving at, although Mrs Daffodil must censure severely any Mama who would allow her sixteen-year-old daughter to go to the opera unchaperoned with a fat, red-faced “gentleman,” no matter what entree he has or what is playing on stage. Without a vigilant Mama en suite, a roué will find a way, whether at Faust or at a week-day matinee. Mrs Daffodil, who always tries to think the worst of her fellow-humans, wonders if the “gentleman” was very rich and the young lady was being used as bait on the matrimonial hook. Or if the sweetness and modesty was merely feigned for commercial purposes.

Mrs Daffodil invites you to join her on the curiously named “Face-book,” where you will find a feast of fashion hints, fads and fancies, and historical anecdotes.