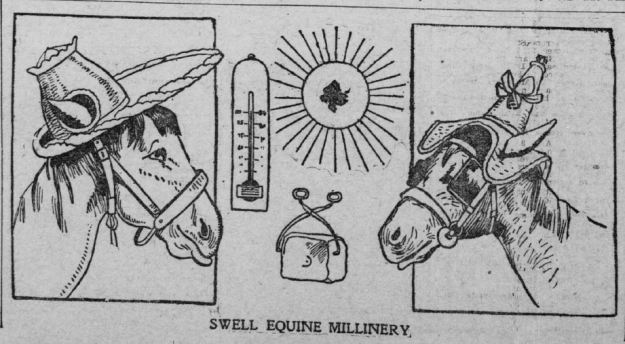 WHY THE HORSES LOOK AT THE MILLINERY SHOPS

If you happen to see a horse stop and crane its neck at a certain bright show window on any of the streets you can set it down in your notebook that some especially fancy bit of horse millinery has caught its eye. The displays in that line are unique this year and gorgeous to a degree; in fact, they rival the array set forth for the delectation of the fair sex and the depletion of the purses of the sterner portion of humanity.

As in the fashions for women, so in those for horses. Paris leads the way. Some of the brightest minds and the most artistic have been engaged to turn out the most rakish headgear for horses and the results are something almost beyond belief. There are hats and hats and then bonnets. There are sweet little bonnets for the gay and skittish colts, tall hats for race horses, flat hats for elderly equines, bonnets for the very aged and poke for those who like that sort of thing. The variety is great and the trimming may be as elaborate as the fancy of the owner may desire.

Some of the hats shown are trimmed with ruffles of ribbon and have little knots and clusters of flowers placed coquettishly at the side. Other hats are as plain in appearance as Quaker bonnets or the sort prescribed for members of the Free Methodist church. Ribbons, laces and flowers are piled on the straw foundations in reckless extravagance. There is no limit to the expense of the things and the millionaire can get his favorite mare a hat that will rival that of his wife if he so desires.

According to the French horse milliners, elaborate coiffures are, to be the vogue this year. Foretops are to be crimped and curled in a variety of fashions, but the accept form is a straight bang, falling just below the hat. Small braids are also in vogue. Most of the hats shown have strings to tie them on with, but those who prefer can fasten the headgear on with ribbons.

A very fetching thing for a coltish young animal is a bonnet tied on with wide streamers. A cluster of flowers placed between the earholes adds much to the appearance of the bonnet. Of course the trimming must be selected to go well with the horse’s complexion. It would never do to trim a bay equine’s hat with a brilliant cerise or a roan with a maroon color.

Some of the economic women have taken to making over their last year’s hats for their horses, and some surprising results have been obtained. In this way hats are to be made to do two season’s work. The first year they appear in church on Easter morning, at afternoon receptions and carriage rides and perhaps in the theater where they obstruct the view plentifully, and then next they appear only on the street or in the stable. A woman with deft fingers can make over one of these hats in a short time and at a very little cost.

Dame rumor has it that the fashionable hat for the horses next year will be the Panama, as it is said the headgear will not be fashionable for men any longer than this year. In this way a great many of the hats will be able to serve two donkeys, the first year a two-legged animal and the second a four-legged animal.

Time was when any old hat was good enough for the horse, but that time has passed. Now there are hats for all sorts and conditions of horses and mules. The truck horse may wear a plain slouch-straw hat, with red braid around the ear holes and the edges and the curette horse may wear an asbestos hat, or some other inedible substance, but your true plutocratic horse will have something more elaborate. Poke bonnets are fashionable for slow horses.

There is an inventor in St. Paul who has the welfare of the horse at hear. Not being content with seeing that the animals have been provided with hats and bonnets to keep their foreheads form being tanned he is about to devise a new sort of heat that will combine all sorts of comforts for the equine. in the first place he has designed a hat that will be light, becoming and comfortable. Beyond this, he is contriving a little electric motor to be fitted into the top of the headgear. This will propel a fan to keep the horse’s head cool and at the same time blow a number of little colored ribbons at a brisk rate to shoo away the flies. Later he may devise some little tubes to run the cold air to different parts of the horse’s body and thus not only keep the animal cool, but also keep away the flies.

Modes to Suit all Sorts.

In the accompanying illustrations are to be found modes for different animals. The poke bonnet is for a curette horse, or some other animal that goes at a slow and poky rate. The other sort, which appears very much like a Panama in the latest block, is for a young, brisk horse with a rather short nose and a coquettish leer in her eyes. For mules, plain hats with bunches of thistles are shown. For very young colts, lawn bonnets may be used, made with wide ruffles that fall around the ears in soft folds. Race horses should always have their hats trimmed in fast colors.

Mrs Daffodil’s Aide-memoire: While Mrs Daffodil feels that horse headgear takes away from the essential dignity of the animal, she assures her readers that, despite the jocular tone and perhaps a certain hyperbole in this article, the fashion for hats for horses was no laughing matter. Campaigners for animal rights and welfare encouraged hats to protect horses from the sun and heat; some organizations would provide simple hats at no cost. In hot weather, it was recommended that a wet sponge be placed in the crown. There were regional variations as illustrated by the Boston and Chicago hats in the photographs.

A “Boston” style hat for horses. 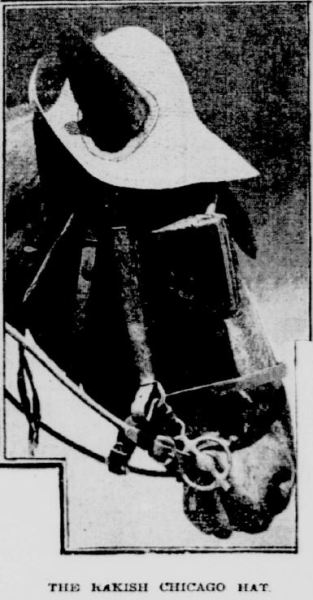 The tradition continues today, not only in the close-fitting caps worn by sporting animals, but in the many embarrassing photographs of ponies in party hats to be found online. And one wonders why ponies are so peevish…. One may also see pictures of magnificent horses wearing elaborate Ascot or Derby confections, which make Mrs Daffodil long to draw the creatures aside and murmur: “Wear it if you like, but it doesn’t suit you.”