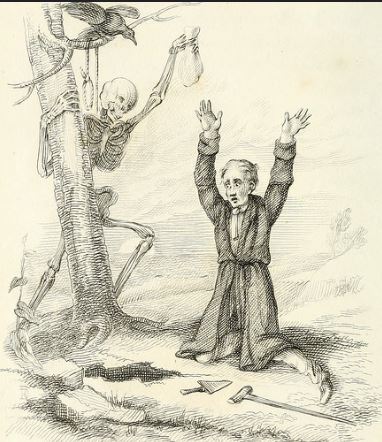 Some years ago the Rev. H. Elwyn Thomas was acting as second minister on a Wesleyan circuit in the South Wales district. The circuit consisted of eight churches, and Mr Thomas had to preach in each of them once a month, beginning his ministrations in Llanelly; from there he went to Crickhowell, arriving at Llangynidr about six o’clock in the evening.  A good “hiker “, Mr Thomas usually did the distance between these places on foot. One fine Sunday evening in June Mr Thomas told the friend with whom he usually stayed at Llangynidr that he would not be back at his house until nine o’clock, as he intended walking part of the way home with some acquaintances. At twenty minutes to nine Mr Thomas said goodnight to his friends and was making his way back to Llangynidr when he saw what he thought to be a beggar, standing on the banks of the canal which runs parallel for six miles with that particular road. The canal and road were lonely; the nearest house was a quarter of a mile away. The intense stillness of a summer night brooded over everything, and Mr Thomas, wondering what had brought anyone to this spot at such an hour, stopped to have a good look. No sooner had he done so, than he wished himself a thousand miles away. Within half a yard of him, he saw a startling and dreadful sight, that of an old man over whose face the leaden-coloured skin was tightly stretched: the lips were thin and bloodless, and the half-open mouth toothless. Two piercing and semi-luminous eyes, set far back, stared at Mr Thomas, who could not avoid noticing that the “beggar” was dressed in a very peculiar way—perhaps the word “wrapped”, not “dressed”, better describes two bands of stained calico, one of which passed under the old man’s chin, and was tied at the top of his head; the other was drawn round the forehead and fastened behind.

So horrible was this extraordinary object, that Mr Thomas actually ran away from it. He was an absolute disbeliever in ghosts, and he had no patience with any kind of superstition, it never occurred to him that the beggar was not of this world, and he only realised this when after, as he thought, outdistancing the figure, he turned around, to find it close behind him. Mr Thomas looked up and down the road, and the deserted canal banks. Not a soul was in sight; the night seemed to hold only him and his pursuer. By this time the wrappings had merged into a column of intense blackness, and there was nothing visible between the face and the ground. Raising his umbrella, in the unreasoning panic which seizes even the bravest, the minister hit out blindly, only to encounter air, through which his umbrella easily passed.

Thoroughly frightened, Mr Thomas once again took to his heels, and ran as quickly as possible down a road which branches off the main road, going directly through the centre of the village of Llangynidr. And feeling that he had arrived at a spiritual crisis in his life, Mr Thomas conquered his fear and confusion, and spoke to the pursuer, whose footsteps made no sound on the silent highway.The “thing” had stopped in the centre of the main road, and when, secure in his newly found moral strength, the minister walked towards it, he saw it moving swiftly until it reached the lower end of the road which runs parallel with the boundary wall of the churchyard. It then appeared to float over the wall, and vanished in the dense foliage of an ancient yew tree near the lych-gate. After this Mr Thomas fainted. He came to himself two hours later, lying in the same place where he had fallen; he was very cold, and he felt bodily ill. Fortunately motor traffic on a Sunday night was practically non-existent, otherwise he might have easily been run over by a passing vehicle. Picking himself up, Mr Thomas took to the road which led to the sanity and safety of human companionship. The reaction from the mental ordeal proved too much for the Minister; it was over an hour before he reached his friends home, barely a quarter of a mile away.

When he did, his changed appearance alarmed his host and his daughter so much that the young girl screamed when she saw him, especially as Mr Thomas was incapable of saying a word of explanation of his condition. He tried to speak, but his words ran into each other and formed an unintelligible babel of sound, and it was not before five in the morning that some kind of speech returned to the stricken minister, and then, only in broken and meaningless sentences. After this Mr Thomas spent the whole of the following week in bed, laid up with a bad attack of nervous prostration.

The strangest part of this strange story remains to be told. When Mr Thomas was himself again, his host questioned him closely about the events of that unforgettable Sunday. “Did you notice anything particular about the place where you first saw the figure?” asked his friend. Mr Thomas thought—and thought again. “Well” said he, “I seem to recollect a ruined cottage a little lower down.”

“Hmm…someone answering the description of your pursuer once lived there. He was by way of being a recluse, lost to all sense of personal respect and decency. His garments were a collection of odd lengths of indescribably filthy calico and I believe he was buried in them, as, owing, to his reputation as a ‘wizard’ no one would go near him in his last illness. He was buried in the exact same spot in the churchyard where you saw the figure disappear, and the cottage, already ruinous, became more and more so, until the greater part fell to the ground. It has never been rebuilt.” During the time Mr Thomas remained on the circuit he never saw his pursuer again…Perhaps the spirit was made manifest to rebuke his obstinate disbelief in “returns”, and from that time the minister never discountenanced the reality of dwellers in the Unseen World.

Mrs Daffodil’s Aide-memoire: The authors were Marchioness Townshend of Raynham, home of the infamously photographed “Brown Lady,” and Maude Ffoulkes, who was, quite literally, a “ghost-writer,” who helped the rich and famous of the Edwardian era write their sensational memoirs. She “ghosted” the memoirs of Countess Marie Larisch (the go-between for Crown Prince Rudolf and Marie Vetsera), the ex-Crown Princess of Saxony, and the Countess of Cardigan, among others.