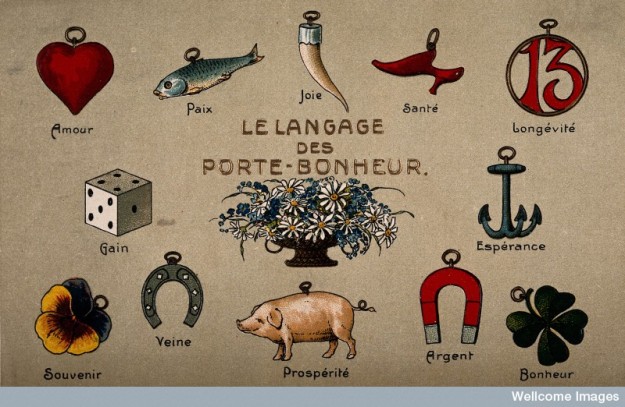 Since it is Friday the Thirteenth, Mrs Daffodil furnishes some examples of good-luck charms of the past by which her readers can defend themselves from any ill-luck on this “hoodoo day.”  Friday the Thirteenth, the “hoodoo” and the “jinx” caused the superstitious to take such precautions as staying home under the covers, avoiding the cross-eyed and the red-haired, and spitting in one’s hat. Mrs Daffodil wishes her readers a safe and jinx-free Friday as she strokes the Hall’s prize mouser, a black cat named Lucy (short for Lucifer). 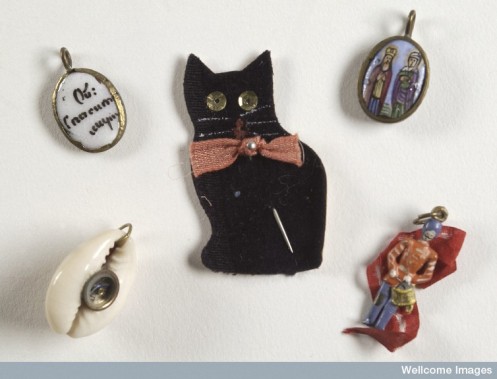 Good Luck Charms used by Soldiers in the Great War. The Wellcome Collection.

Just at present it is fashionable to be superstitious. One of the latest fads is the wearing of good luck charms on lorgnette charms, watch fobs or bracelets. They must number exactly thirteen, to counteract evil influences. So popular have these become that all of the pet superstitions are considered by the ingenious jeweler, who makes a variety of collection with just thirteen in each dangling bunch.

There are all sorts of talismans. The horseshoe and the clover hardly need be mentioned, and there is a perfect outburst of animal patterns of every conceivable nature. Among them are foxes’ masks, dogs’ heads, elephants, pigs, horses, monkeys, game cocks, fish and other perfect miniature representation from the world of creatures that run, fly or swim. An instance of the oddity of some of these objects is afforded by a poodle dog, whose body is in gun metal, with the unclipped portion formed of brilliants and the eyes indicated by spinels.

Flowers, some encased in glass lockets and hearts, are also shown. Evansville [IN] Courier and Press 22 April 1900: p. 13

Women are turning to charms and fetishes. It almost looks as if it might be the beginning of another age of superstition. I don’t know why all this has happened, but nearly all my women friends and theirs are carrying charms of one kind or another.

And the charms of today are not the tiny [figure] made of yarn which were so much in evidence during the war years. They are elaborate and some of them are very costly.

A good many of the old fetishes have fallen into disrepute. There were those jade elephants which women were so fond of wearing for a while. I don’t know what clever tradesman foisted them upon a superstitious femininity, but someone did and must have made a lot of money out of it.

But one can’t exactly say that the jade elephants are no longer worn, for they never were affixed where they could show by the women who claimed to know best, the mystic fetishes which will bring good luck.

They were oftenest suspended upon hidden strings about the neck and hanging pendant in close intimacy somewhere in the region of the heart, or else held in little knitted bags upon the garter.

For some reason or other the strings on which they hung and the knitted bags in which they were concealed always were made of red woolen yarns.

Everybody had the tiny [figures] I have spoken of. I am told that they were first imported in the early war years from some place in Africa where the natives made them, and remember that the first I ever saw were made of black yarn. Later I saw others made of colored worsteds, but they were still called [figures]. They only cost a shilling or two but the “genuine” were hard to get.

Now, even though these [figures] seem to have lost popularity, women are still carrying charms.

Jade bracelets were among the things of yesterday, even more popular than the small jade elephants. Everybody wore them. Some still do. They are not, I think, particularly pretty. To my mind they are far too heavy, cumbersome, and in some subtle way, suggestive of the Chinese slave-girl. But they have been extraordinarily popular and more than one English woman, finding that she has forgotten her jade bracelet, will forego any enterprise of any manner of importance, especially if associated with her love affairs, until the error has been corrected. That especially was true last year, not of hundreds or even of mere thousands of women here in England, but of tens of thousands.

Today one does not often see a jade bracelet. Where have they all gone? And what real effect could they have had on luck? No unusual number of disaster have affected womankind since they began to be sent to limbo.

I note one fad among this winter’s women. It is for bracelets of thin, flat gold bands, concealed almost as carefully as were the little woolen [figures] but not so intimately, for the [figures] usually nestled in the wearers’ booms. The flat gold circles are about the arms under street sleeves and are engraved with names of sweethearts or other loved men, dead or living.

Some of them are very handsome, done in open work, and as much as 2 ½ inches wide. But apparently they must not be worn openly; that is, in public view. I have the fancy that when evening dress is worn they are perhaps caught to a garter or worn otherwise concealed. It is said to be bad luck to leave them off at all. I have been told that there are some who wear not bracelets but larger bands, just above that intimate equator round which the old garters used to clasp the fair.

Agate bracelets, milky white, and perhaps, cleverly engraved upon the inner surfaces with the donor’s name are pretty and are said to bring good luck if presented by a really, truly true-love, but they are as heavy as the jades were and probably will not have much vogue for that reason. Baltimore [MD] American 8 January 1922: p. 1 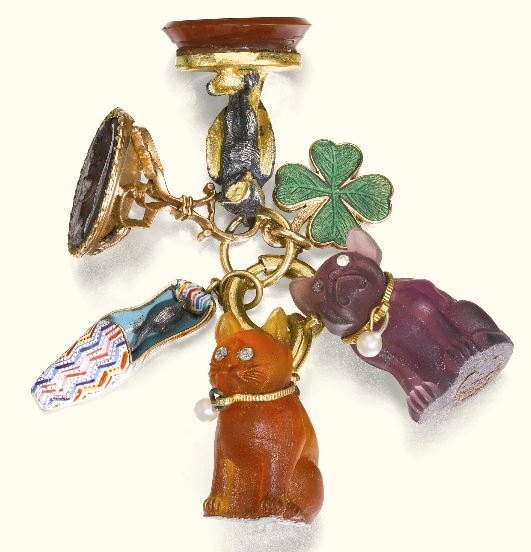 An assortment of lucky charms. http://www.sothebys.com/en/auctions/ecatalogue/2015/of-royal-and-noble-descent-l15306/lot.78.html

“Love Band” In Garter’s Place Has Its Charms.

Auteuil racegoers today were bewildered by a tinkling, chiming sound seeming to come from everywhere in the reserved paddock. Interest was at fever heat when finally the mystery was solved.

A man was seen to kneel at the feet of Ernestienne, a well-known dancer.

Slightly raising her skirts, the dancer revealed the “love band” in place of a garter, and to it was attached a score of tiny charms, including miniature golden bells, ivory elephants and Indian luck fetishes.

Producing another charm from his pocket, the dancer’s adorer proceeded to fasten it, while Ernestienne confided to listening friends that each fetish was given to her by an admirer in token of the affection, the intrinsic value of the charm betokening the depth of his love.

Mrs Daffodil’s Aide-memoire: Would those ladies be vying for the largest collection of charms or of admirers? Mrs Daffodil suggests that it is very unlucky for a lady to have a gentleman who is not her husband kneel before her at a race-course, in front of witnesses, and add a love-charm to her hidden collection. Such actions, no matter how innocent, simply offer too much scope for misinterpretation.

Mrs Daffodil has substituted the word “figure” above for the actual word, which was a vile racial slur. The offensive term, alas, was still in use, even by people professing good breeding. The little yarn dolls were very popular charms for soldiers during the Great War.

Mrs Daffodil has previously written about the hi-jinks of “The Thirteen Club,” the “hoodoo hat,” and an unlucky opal ring. That curious person over at Haunted Ohio has written about “Hoodoos Through History.”