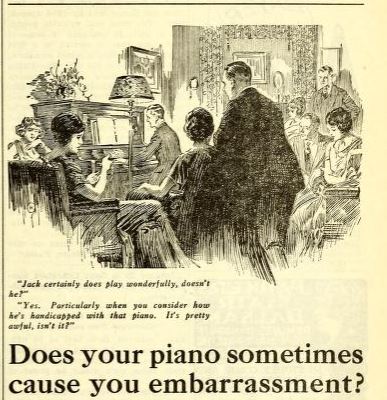 It is a mistake to suppose that, even as an accomplishment, piano playing is so very highly prized. I dropped in to spend an hour with an intelligent friend. I was particularly interested in the Franco-Prussian war, and, as he had lived much, both in Paris and Berlin, I hoped to learn about some things not discussed in the newspapers. His youngest daughter, a beautiful girl, had just arrived, fresh from the glories of the closing exercises of a seminary.

We were in the midst of our discussions, and he was repeating some conversations with Bismarck, in which I was intensely interested, when the fond, proud mother said :

“Now, if you will listen, Gertie will play the piece which she played last Thursday evening at Madame ‘s.” Gertie began, alas, and she kept on, and on, and on.

There were four of us gentlemen, three were callers, one the editor of a city paper. We were all eager to listen to our host, of Bismarck and Napoleon.

That unhappy child kept at it. We sat there with a hypocritical smile on our faces, but, internally, as mad as we could be. When at length, the sixteen pages had been finished, and the girl turned around for the prescribed adulation, all but one of us exclaimed, “wonderful, exquisite, delightful!” and the editor, (who, when coming down in the car an hour later, emphasized his disgust with an awful big word,) declared he had never heard anything so wonderful, and added, that she really ought to go abroad to study with the great masters. The lying executed by some of us was perfect. I have forgotten whether this kind of falsehood is mentioned in the works upon white lying, but if I ever write upon “white lies,” I shall give this kind a prominent place.

Girls, if you ever obtrude an average piano performance upon a company of intelligent people, engaged in conversation, nine in ten of them will secretly regard you as a nuisance, no matter how much they exclaim, “exquisite, delicious, wonderful!” Of course your parents will be gratified with your performance; mamma will be pleased and proud with the show-off, and papa will smile. How else could he do, after paying $2,000 piano bills? It is a pretty picture to their eyes — the loved one seated at a splendid, great instrument, executing one of the grandest compositions of one of the immortal masters. And, although you are not inspired with the passion of the heaven-born composer, and your performance is a mechanical, soulless humdrum, that matters not to your father and mother, their loving imaginations will supply all that is needed to make the picture complete. But the rest of us will heartily wish that you had not interrupted our conversation.

It is an amazing blindness on the part of parents. It always astonishes me that they don’t see the impertinence of the thing. They certainly wouldn’t think of asking the company to cease their conversation to hear you speak your piece, or perform a dance. The piano alone is licensed to say to everybody, “cease your conversation, and listen to me; I am about to make a big noise!”

Mrs Daffodil’s Aide-memoire: Mrs Daffodil is reminded of that scene from Pride and Prejudice where Elizabeth Bennet’s sister Mary sets out to entertain: “Mary’s powers were by no means fitted for such a display: her voice was weak, and her manner affected.” And of Mr Bennet’s admirable pronouncement: “That will do extremely well, child. You have delighted us long enough.”  Dr Lewis no doubt on many occasions longed for a Mr Bennet.

Dr Diocletian Lewis [1823-1886] was a homeopathic physician, temperance and physical hygiene advocate. We have previously read his screed on the insidious poison of the opera.