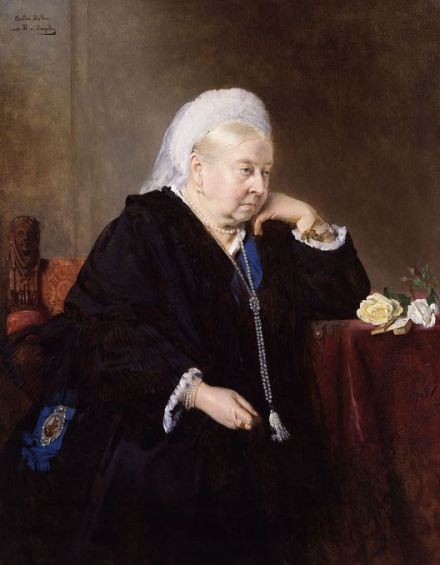 Royal Widows and their Weeds

The Gaulois gives some interesting particulars as to the mourning worn by widows of royal and imperial rank in Europe at the present time. A modification of the English widow’s cap, as worn for so many years by our Queen, would appear to be the form of coiffure at many Courts and the same journal states that an English milliner possesses a monopoly of supplying these to the royal families of Europe. The description given in detail shows that the cap, as worn at foreign Courts, has black lisse weepers. The aged Empress Augusta [widow of Emperor Frederick II of Germany], though she wears in other respects the conventional widow’s mourning, is obliged to wear a really warm cap, owing to the neuralgic headaches from which she suffers. The immense strings fall almost to the carpet when she is seated in her large arm-chair, which is mounted on rollers.

Queen Victoria and her daughter, the Dowager Empress Frederick of Germany, in mourning for Emperor Frederick III, who died shortly after assuming the imperial crown. https://www.rct.uk/collection/search#/24/collection/2105953/queen-victoria-with-victoria-princess-royal-when-empress-frederick-1889

The unfortunate Empress Charlotte, widow of Maximilian of Mexico, has always been careless of her dress since the great tragedy of her life. In her widowhood and mental alienation she loves to wear the brightest colours, though her attendants have frequently tried to dissuade her from doing so. She often puts red roses in her hair, as she is represented in her portrait by Baudan, in which her remarkable resemblance to her grandfather, Louis Philippe, comes out so strikingly.

The Empress Eugenie wears the very simplest sort of mourning. Her gowns are of woollen fabric, and fall in plain folds from the waist. Her dressmakers occasionally attempt some variation upon their unstudied simplicity, but the Empress always bids them revert to the untrimmed dresses that she now prefers. The Queen-Regent of Spain has till quite lately worn deep mourning that was almost nun-like in its severity, The dress, very flat and straight, has had a long full train. Upon her head the has always worn a mantilla of a black woollen fabric, without even the relief of a fold of transparent crape. For extra covering, when crossing the gardens or traversing the long corridors of her palace, Queen Maria Christina wears a long black mantle lined with white velvet. She uses two pearl-headed pins that King Alphonso used to admire, for fixing the thick black veil upon her head. For certain occasions of ceremony the Queen-Regent has of late doffed her sombre black and worn a lilac gown but she seems to like to return to the black veil that denotes her widowhood.

Princess Stephanie’s still girlish head— she is but twenty-five— is the latest to wear the royal widow’s cap, under which her fair hair is almost hidden, and the black and white of Austrian widows’ mourning. Some dresses just sent to the Empress Frederick illustrate the etiquette of the first twelve months’ weeds. Among them is a mourning dress in plain English crape, the skirt of which is gathered all round the waist. The Empire bodice has a deep collar of white batiste and cuffs to match that reach to the elbow, A long trained house dress is in black cashmere the front being entirely covered with crape, pleated diagonally across it. The cuirasse bodice has a plastron of crape, the fastenings of which are concealed beneath two bias folds. Large sleeves of white crepe lisse are worn ever the black ones, the latter shewing through. A tea gown, in a soft fabric called woollen velvet; opens over a front of striped black crape. The long train is lined with white silk. The belt that confines the gown at the waist is made of woollen passementerie studded with unshining wooden beads. The collar and cuffs are of thick white serge embroidered with black. Among the dinner gowns is a Princess dress of English crape, the front of which is draped over black silk. Another is in black woollen velvet with train gathered on the back, and trimmed with an embroidery of small wooden beads. On the flat bodice is a deep white collar, like a nun’s, but made of the very finest batiste, in this respect unlike a nun’s. Among the mantles is a long and ample one, intended to be worn in driving, and made of black woollen crape, lined with Astrakhan fur. The young princesses wear black serge gowns with riding habit bodices, and collar and cuffs of black crape lisse. Their evening dresses are black grenadine, closely pleated over dull black silk, trimmed with English crape, and worn with black silk sashes. 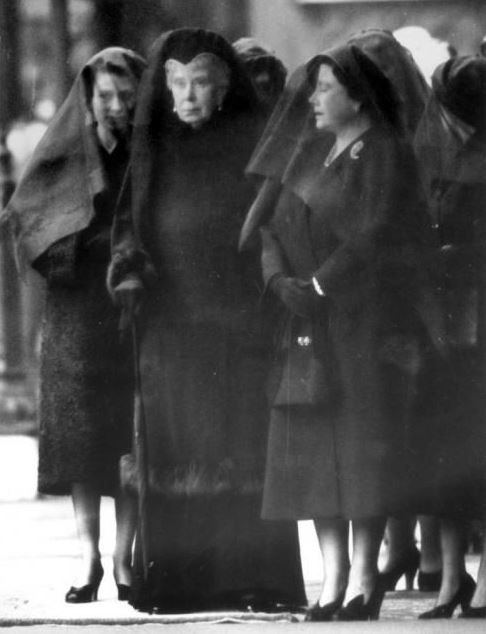 Mrs Daffodil’s Aide-memoire: King Edward VII had a horror of prolonged mourning, no doubt in part to his mother’s life-long obsession with the trappings of woe. This dislike was framed in a kindlier spirit in an article telling of King George’s wish that general mourning for his father be cut short by a month and that half-mourning be dispensed with entirely.

“King Edward had a deeply rooted objection to prolonged royal mourning because of its untoward effect upon trade, and his son is showing equal consideration to the vast army of shopkeepers and their helpers.” The Illustrated Milliner, Vol. 11 1910

The Queen Dowager, widow of King Frederick William IV., fell seriously ill at Dresden, where she had been staying with her sister, the Queen of Saxony, about the time I married. She died early in November, and to my intense dismay I found myself obliged to put aside all my pretty trousseau dresses, and to smother myself in crape, for a person I had never seen. Court mourning was not a joke at Berlin at that time, whatever it may be now. Whenever the notice of it appeared the whole of society covered itself with garments of woe, and every kind of gaiety was instantly put a stop to. Queen Elizabeth, having been a reigning sovereign, the mourning for her was as severe as it could well be, and consisted of long black cashmere dresses, a kind of Mary Stuart cap of black crape, and two veils, one falling over the face, and the other trailing behind to the very ground; the last-mentioned had to be worn indoors, and I remember my mother-in-law insisting on our decking ourselves with it every evening for dinner, in anticipation of a possible visit from the Empress, which event did actually occur two or three times during the period when these trappings of woe were prescribed. In Russia black is never worn on holidays, but in Germany it is different, and even on New Year’s Day we went and offered our good wishes to the Emperor and Empress in our crape dresses and veils, and anything more gloomy I am sure I have never seen, either before or after that, in the whole of my life. My Recollections, Princess Catherine Radziwill, 1904

Mrs Daffodil, by the bye, would disagree with the “girlish” assessment of Princess Stephanie, widow of Crown Prince Rudolph of Austria, who made such an mess of things at Mayerling, She may have been immature when betrothed to the Crown Prince, but she had fallen in love with a Polish Count in 1887, two years before this article was published. When Rudolph resumed his self-absorbed round of pleasure of Vienna, she was quite capable of giving as good as she got and scarcely troubled to hide her infatuation.