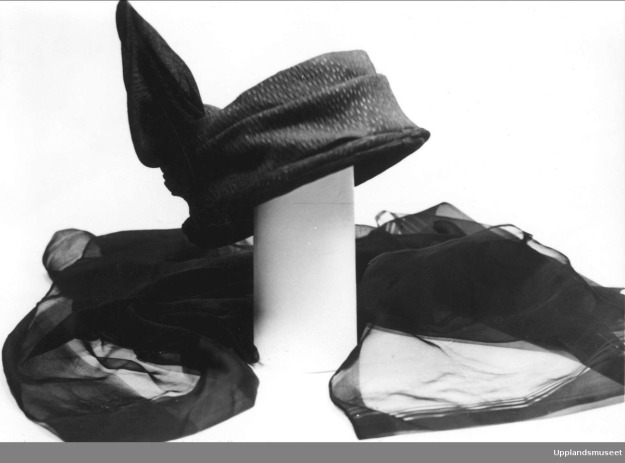 On this Remembrance Day week-end we remember some of the alternative methods of mourning suggested during the Great War.

In 1917 Reformer Dorothy Dix strongly urged an end to traditional deep mourning. She pointed out that “What the psychological effect, not only upon the minds of women, but upon men of the sight of thousands of women dressed in mourning is appalling to consider…[a woman who puts on a colored dress] saddens no one else with her sorrow. She stabs no other woman to the heart with a remembrance of her own loss…Her colored dress, worn when her very soul is black with mourning, is the red badge of courage.”

Further, mourning is costly: “the cost of a complete mourning equipment for a well to do family would buy many liberty bonds…It is said that this war is going to be won by money…Therefore, the women of the country cannot only do a big patriotic duty, but avenge their dead by putting their money into bullets instead of crepe.”

And, finally, wearing mourning is literally sickening: “That women are depressed by wearing mourning and are made sick and nervous is a well-established fact…it wrecks her own health and makes her sacrifice the living to the dead…I hope that the women of America will rise above the heathenish custom of decking themselves out in black to show that they grieve. There will be no need of flaunting personal grief, for at the bier of every soldier who dies for his county the whole nation will bow in sorrow…” Augusta [GA] Chronicle 5 December 1917: p. 5

In 1914 Mrs Edward Lyttleton, wife of a clergyman soon to be criticised for his German sympathies, suggested that mourning for the dead of the War should consist of a “simple narrow band of purple cloth to be worn on the left arm by every man, woman or child who had lost a relation in the war.” She pointed out the economical advantages and that the badge “would be the same for all classes.”  In addition, “If the well-to-do women of the empire would lead the way in this matter they would make things easier for their poorer sisters, who surely must often stint themselves of necessities in order to get the “bit of black” so dear to their hearts.” The Denver [CO] Post 16 October 1914: p. 10

The mourning armband with a star. The patent application was filed in 1918, but it was not patented until 1920.

Another arm-band scheme was suggested much later in the conflict and endorsed by the President of the United States.

“No mourning costumes during war time, but rather the substitution of a mourning badge or an arm-band of black with a gray star,” was the recommendation of the General Federation of Women’s Clubs at a session at Hot Springs, Ark. Mrs. L. Brackett Bishop, of Chicago, suggested that the conventional period of mourning be abolished during the war. Mrs. Bishop has made an extensive study of colors and concludes that the wearing of black causes many mental disturbances. “Certain colors are avoided by women because their nature resents them,” she said. “But the general effect is happiness. If happiness is to be won in the world, color will do it. Another reason for this strong need of color is the fact that the earth revolves each twenty-four hours a day, and each day we are in the same plane as was the fighting of yesterday. We must be bright and cheery to overcome the cloudy days. Color will win the war for us, and it is going to be won by the colors we wear and by the brightness we can thus add to the world and to the people about us through the mental attitude expressed in our costumes.” A standard arm-band furnishes an excellent substitute for the wearing of black. It has all the objectionable features of black removed and still serves the purpose of indicating that a death has occurred.

Patents for a standard arm-band have been applied for. This arm-band consists of a black background symbolizing the black war-cloud with the blue sky beyond. A torch indicates the blazing path of national attainment and a lyre symbolizes the rejoicing at valor and sacrifice, while the dove of peace hovers over all. These bands are to be made in the colors of the Allies. [This design does not appear in the patent records.]

The Women’s Committee of the Council of National Defense has suggested an arm-band with a gold star for the death of each member of the family in service. President Wilson has given his approval of the suggestion in the following letter made public by Dr. Anna Howard Shaw, chairman of the committee:

“My Dear Dr. Shaw: Thank you for your letter of yesterday. I do entirely approve of the action taken by the Women’s Committee in executive session, namely, that a 3-inch black band should be worn, upon which a gilt star may be placed for each member of the family whose life is lost in the service, and that the band shall be worn on the left arm. I hope and believe that thoughtful people everywhere will approve of this action, and I hope that you will be kind enough to make the suggestion of the committee public, with the statement that it has my cordial indorsement. Cordially and sincerely yours, WOODROW WILSON.”

In an explanatory statement on the subject the Women’s Committee says:

For a long time the Women’s Committee has been receiving letters from women urging some such action on their part. The determined avoidance of mourning by English women has been much commented on and praised. One woman. who advocates this step has four sons in the service one of whom has already been killed. She wrote recently: “I know the costliness of such supreme glory and sacrifice, and have felt both the selfish temptation to hide my pain behind a mourning that would hold off intrusion and the inspiration and stimulus of keeping up to my gallant son’s expectation that I should regard his death as a happy promotion into higher service. Patriotism means such exalted living that dying is not the harder part.”

The insignia which has been chosen by the Women’s Committee is of a kind that can readily be made at home out of whatever material can be procured. The band is to be black and 3 inches wide—the stars gilt, and one for each member of the family who has lost his life in service. These stars may be gold, of gilded metal, or satin, or of cloth. The design will not be patented, and the insignia will never become a commercial article. Dry Goods, Volume 19, July 1918, p. 5

A return to a Victorian insignia of mourning was also suggested.

Now that almost all American women are joining it the movement to help win the war by banishing from the streets the depressing sight of crepe and deep mourning garments, the need is felt for some expressive symbol that shall be the privilege of those bereft by death, whether through the war or through other causes….every woman who feels it a sacrifice to give up her mourning apparel would appreciate some distinguishing symbol the wearing of which would satisfy her own heart.

When the question was being discussed the other day in a room full of women, knitting for the Red Cross, one sweet-faced little woman pointed to a beautiful old-fashioned jet brooch at her throat. “This,” said she, “is my mourning. It is a treasured family heirloom full of dear associations. The members of our family do not believe in mourning apparel, but this brooch represents to me, mourning. It is never worn except at such periods, and is then worn constantly—with all costumes. When I wear this brooch, I am in mourning as truly as though clothed in deepest black.” The idea seems a very beautiful one which may well be passed on. In every family there is some piece of jewelry of this sort beloved because of association with those who have gone before and worthy of being the special symbol of remembrance and a time set apart from worldly pursuits. Oregonian [Portland, OR] 23 June 1918: p. 73

For more information on mourning in the Victorian era, with some notes on the Great War, see The Victorian Book of the Dead.

Mrs Daffodil’s previous Remembrance Day post on the Peerage in mourning is here.