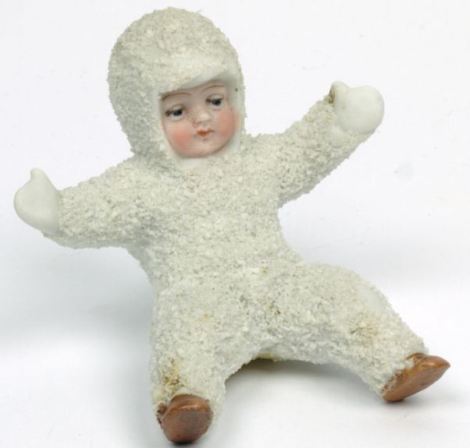 A BABY IN THE SNOW

A STRANGE CHRISTMAS EXPERIENCE OF A TRACKWALKER.

A Railroad Man’s Story of a Cold, Stormy Night Over Twenty Years Ago, when the Snow Was Piles in Banks Along the Railroad Track

“Every time I think of Christmas I think of the year 1872,” said an old trackwalker. “That’s more than twenty years ago, isn’t it? Twenty years is a good long stretch. Lots can happen to a man in twenty years. He could get rich and spend it all and get rich again in that space of time and still have lots of time to spare. But I haven’t. I’ve just stayed poor right along.

“But as I was saying, speaking of Christmas always reminds me of 1872. I was trackwalking then for the Vandalia line on a section between Terre Haute and Farrington, in the state of Indiana. That Christmas night was a corker, I’ll tell you. I heard at noon from the section boss that the thermometer was 10 degs. Below zero, and as night came on it seemed to get colder and colder. It had snowed the day before—one of the deepest in that year—and the engines had had a pretty tough time of it plowing their way through in the morning.

“After they did get by my section the snow was banked up seven or eight feet deep in some places, by the side of the track. I was so cold that I wrapped coffee sacks around my feet before starting out, just to keep them from a frostbite. You bet I hated to start out, but I did muster up the courage after awhile. It was about 9 o’clock when I started to go back to Farrington, and the wind was in my face. ‘It’s a durn poor Christmas for me,’ I thought to myself as the wind caught me a belt in the side of the head. ‘Here I’m fated to walk this cold track until midnight without even a kind word from anybody to say “Merry Christmas to you.” It’s pretty tough. I guess track walking is just about the worst trade a man who loves company can adopt.’

“As I was stamping along thinking like this, away off ahead of me I saw a sparkle. ‘It’s the St. Louis express,’ I said to myself, ‘and she’ll be rumbling over me at about sixty miles an hour. You had better go out in the snow, old man, unless you like being ground into little bits. Boo! But that snow was deep. Way up over my waist. But when I got down off the track and snugly tucked away in the drift, I was a heap warmer, because the wind couldn’t reach me. And the old train came right ahead with a buzz and a roar, and her old yellow headlight getting brighter and bigger every second. It was a train of six or seven passenger coaches. All were lit up as bright as kerosene oil could make ‘em. One, two, three, four of the cars whizzed past me. But the fifth seemed to stop. It didn’t, of course, but the sight I saw seemed to nail it to my eye!

“A man and a woman. They stood at the rear window. It was open. I saw the man with his arms put out, supplicating like. The woman had a bundle in her arms. Then she didn’t have it. The man gave a cry of horror that rang out high above the clamor of the wheels and the rattle of the rails and the creaking of the coaches. Something shot down just past my head and landed in the snowdrift beside me. I shut my eyes, but still saw the woman with the bundle and the man with outstretched, pleading arms. When I opened my eyes again the train was a quarter of a mile away, with her rear green light sinking swiftly into a dot and then disappearing. The wind cut me sharp on the cheek, and five miles off I heard the church chime in Farrington tolling the quarter hour. ‘That sight was a dream, old man,’ I said to myself as I pulled my legs out of the drift. ‘But the bundle,’ I exclaimed. Involuntarily I looked down in the drift and saw another hole in the show, not the one I came out of, but a smaller one.

“Maybe you’ve guessed the thing by this time and maybe you haven’t. Well, sir, that bundle was just as cute a 20-pound kid as I want to look upon. Hurt? Well, I guess not a little bit. When I found him he was laughing contentedly as you please and chewing a chunk of snow for a sugar cake.”

“You tell. I can’t. I never knew and never expect to know. He had good clothes on, and the odd little collar of lace he wore was marked with a pretty silk T. He was fat as a Christmas turkey and the biggest eater you ever saw.”

“Why didn’t you find his parents?”

“Didn’t I try my durndest? Didn’t I spend half my wages for the next month advertising in the newspapers? But no answer did I get to any of them. It seems to me that the man ought to have come and got the child, for he evidently didn’t want to see it fired off like that. His outstretched, supplicating arms showed that. But perhaps he only wanted to prevent its being killed. Who knows? Perhaps he was glad to get rid of it, and when he saw that somebody had it all right he was glad enough to leave it to its chance fate.”

“What became of the child?”

“Named it Tom after myself. Tom McCormack is a pretty good, solid sort of a name, you know. My family may not be very stylish, but none of them have been hanged anyway. And, you see, the kid’s collar had a T on it. I almost had to name him Tom.”

“Trackwalking on the Vandalia, not more than twenty-five miles from the very spot where his little baby head plumped into that snowbank Christmas night, 1872.” St. Louis Globe-Democrat.

Mrs Daffodil’s Aide-memoire: Mrs Daffodil must say, despite the unpolished American vernacular of the narrator, that it is refreshing to read a Christmas story in the popular press that does not contain a ghost, a reformed burglar, or a dying child.  A “track-walker,” incidentally, is one who walks up and down the railway lines, looking for damage or obstructions. It was a thankless, but necessary task. Despite Mr McCormack’s frigid Christmas, he seems to have derived considerable satisfaction from the events of the day.

This story simply cries out for a sequel published in a later Christmas number where the gentleman on the train found his lost boy, recognised the collar with the silk “T,” fell upon his neck, weeping, and left him his entire fortune.