It is said — by whom no one seems to know — that if the day chosen by a girl for her wedding proves to be rainy, her life will be filled with more sorrow than joy. Be that as it may, one of the happiest of marriages was made on Friday the thirteenth day of the month, and at the hour set for the ceremony there was a most terrific thunderstorm. In spite of the fact that for years it has been said that Saturday was the most unlucky day of the week for weddings, of late it has been selected by brides of international fame.

If the carriage containing the bride should meet a funeral procession, the driver must be instructed to turn some other way. If he does not, fate decrees that she will not long survive the wedding.

To avoid the possibility of any bad luck on her wedding day, the bride elect should not offer to assist in washing or wiping the family dishes, for if by chance she should happen to break a bit of china, it would be an exceedingly evil omen — the old record does not say what, but it would be prudent not to tempt fate.

Gray is the color a bride should choose for her going-away gown if she wishes to wear what for ages has been considered the proper thing to insure good luck. Perhaps that is the reason there has been such an unprecedented demand for gray.

When the cake known as the “groom’s” is passed at a wedding supper the girl who gets the longest piece will be the first married. Maidens anxious to leave the state of single blessedness should consult the head waiter and see that the cake is cut in irregular pieces.

Fate was certainly kind when she decreed that for a bride to shed tears on her wedding day was a good omen, for it would take a pretty stoical young woman to go through breaking home ties without a few tears, no matter how alluring the prospect of the new life.

Snow falling on a wedding day augurs well for the happy couple, being the prophecy of great happiness. That may be the reason why the winter months are so popular for marriages

From the following lists of months the bride may select the one which she considers most auspicious.

Marry when the year is new, Always loving, kind, and true.

When February birds do mate You may wed, nor dread your fate.

If you wed when March winds blow, Joy and sorrow both you ‘ll know.

Marry in April when you can, Joy for maiden and for man.

Marry in the month of May, You will surely rue the day.

Marry when June roses blow, Over land and sea you ‘ll go.

They who in July do wed Must labor always for their bread.

Whoever wed in August be, Many a change are sure to see.

Marry in September’s shine, Your living will be rich and fine.

If in October you do marry, Love will come, but riches tarry.

If you wed in bleak November Only joy will come, remember.

Probably nine lasses out of every ten go to the altar wearing the proverbial:

“Dame Curtsey’s” book of novel entertainments for every day in the year, Ellye Howell Glover 1907

A bride who believes in the old superstitions that have been handed down from generation to generation will not dress herself entirely until the time for the ceremony, and she will not allow a maid to assist in pinning on her veil—this service must be performed by a wife and mother.

Unless she wishes to be ruled with a rod of iron by her future husband, the bride must put on her right shoe first when dressing for the wedding. Similarly, the right glove must be put on first to ensure her being first in her husband’s affections.

Considerate brides wear as many pairs of garters during the ceremony as they have bridesmaids.

For the best day of the week, an old rhyme says:

Monday for health, Tuesday for wealth,

Wednesday the best day of all.

Thursday for crosses, Friday for losses;

Saturday no luck at all.

[Mrs Daffodil notes that the latter prohibition has entirely fallen out of favour.]

“Happy is the bride that the sun shines on” is a prophecy that has come to us from early days on the coast of Wales. There the mists blowing in from the sea made days of sunshine rare events, and the bride on whom the sun shone down considered herself most fortunate.

The bride must remember, also, that she must not allow her prospective husband to see her in her bridal attire until she meets him before the altar, as to do so is supposed to invite all kinds of bad luck. [The future King George V accidentally caught sight of his bride, May of Teck, down a corridor on the morning of their wedding; the incident did not seem to impair their mutual devotion.]

1877 wedding dress in purple or mauve. Obviously it is difficult to rhyme “purple,” but “mauve?” “Married in mauve, your love will rove?”  http://bowes.adlibhosting.com/Details/collect/1157

As to what the bride shall be attired in, there is an old rhyme which runs:

Married in white, you have chosen all right;

Married in gray, you will go far away;

Married in black, you will wish yourself back;

Married in green, ashamed to be seen;

Married in pearl, you’ll live in a while;

Married in pearl, you’ll live in a whirl;

Married in yellow, ashamed of the fellow;

Married in brown, you’ll live out of town;

Married in pink, your spirits will sink.

One beautiful marriage custom is that of the bride, immediately after the ceremony, flinging her bouquet among her bridesmaids. She who catches it is destined to be the next bride.

And a few more:

Superstitions regarding marriage are common in all parts of the world. One is that a bride, on leaving her home for the wedding trip, must step into the carriage right foot first. She should do the same when she first enters the home prepared for her after the bridal trip. 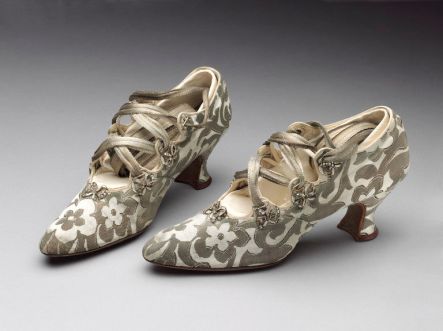 When a bride dreams of fairies the night before her marriage she must consider herself blessed, and if she finds a spider on her wedding dress it also means a blessing. Philadelphia [PA] Inquirer 25 November 1906: p. 1

Mrs Daffodil’s Aide-memoire: Of course, the real reason winter was so popular for early weddings was that much out-door labour had ceased; the Christmas holidays were a particularly favoured time. One also is sceptical of the “golden dollar” in the bride’s shoe. Surely a crippling addition and a tradition designed for the nouveau-riche American market, rather than the traditional modest English six-pence. To Mrs Daffodil’s mind, finding a spider on one’s bridal dress would be far from lucky, leading as it might to much shrieking, beating of hands, and perhaps a distasteful smudge on the pristine white fabric.

Mrs Daffodil would be interested to hear any other bridal traditions/superstitions her readers have known or adopted.

All that's weird in Oz.

A haunting we will go...