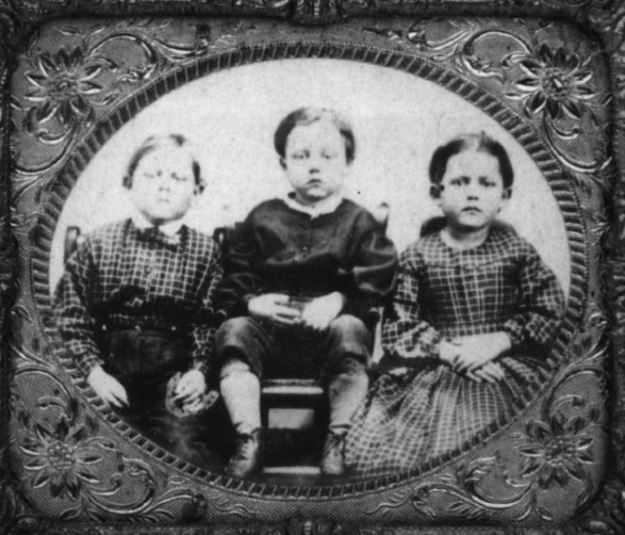 The Children of the Battlefield.

I think that one of the saddest incidents of the war which I witnessed was after the battle of Gettysburg. Off on the outskirts, seated on the ground with his back to a tree, was a dead soldier. His eyes were riveted on some object held tightly clasped in his hands. As we drew nearer we saw that it was an ambrotype of two small children. Man though I was, hardened through those long years to carnage and bloodshed, the sight of that man who looked on his children for the last time in this world, who, away off in a secluded spot, had rested himself against a tree that he might feast his eyes on his little loves brought tears to my eyes which I could not restrain had I wanted. There were six of us in the crowd, and we all found great lumps gathering in our throats and mist coming before our eyes which almost blinded us.

We stood looked at him for some time. I was thinking of the wife and baby I had left at home and wondering how soon, in the mercy of God, she would be left a widow and my baby boy fatherless. We looked at each other and instinctively seemed to understand one another’s thoughts. Not a word was spoken, but we dug a grave and laid the poor fellow to rest with his children’s picture clasped over his heart. Over his grave on the tree against which he was sitting I inscribed the words: “Somebody’s Father. July 8, 1863.”

Mrs Daffodil’s Aide-memoire: Mrs Daffodil trusts that her readers will excuse her for a moment; she has something in her eye.

Mrs Daffodil is unsure whether the soldier mentioned above is the same as in this story:

IDENTITY ASCERTAINED.— The identity of the dead soldier who was found on the bloody field of Gettysburg, with the picture of his three pretty little children tightly clasped in his hands, has been ascertained within a day or two. The wide publicity given to the touching circumstances through the medium of the press produced the desired result. The name of the deceased was Hummiston [Humiston], and his widow and three children reside at Portville, Cattaraugus County, New York. Large numbers of photographic copies of the picture upon which the dying eyes of the warrior-father closed have been sold, and the profits realized from their sale will be appropriated to the benefit of the children. It is hoped that a sufficient sum may be realized in this way, and by future sales, to aid materially in the education of the little ones who were made orphans at Gettysburg. Godey’s Lady’s Book [Philadelphia, PA] March 1864

Two vs. three children is a significant discrepancy, but may be due to inaccurate reporting. The three Humiston children are pictured at the head of this post, and here is an admirably detailed article about Sergeant Humiston. Since the soldier from the first story had his children’s picture buried with him, it must mean that this was, sadly, not a poignant and isolated incident.

See these other posts about Elizabeth Thorn: The Angel of Gettysburg, the man who decorated his own grave at Gettysburg, and a Quaker Prophetess who foresaw the Battle of Gettysburg.