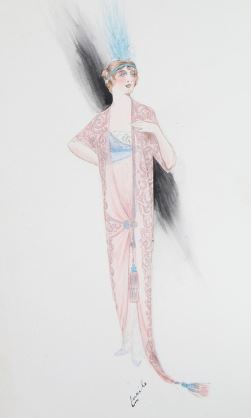 Dressmaker Is the Skeleton in The Picture Actress’ Closet

Brand-new Gowns Are Demanded For Almost Every New Scene in Photoplays.

MUST ALWAYS BE IN STYLE

Film Patrons Also Insist on Creations of Famous Modistes, and Players Provide Them.

“And then some more gowns!”

This is the reason given by a motion picture star who is well known in Washington, why young girls should take something strong and positive when the symptoms of a desire to become a motion picture actress first appear.

The business of dressing a motion picture play is more serious than the play itself, declared this actress. She has had considerable experience on the stage, and has become very well known in motion pictures. As she has been a great stickler for proper costuming in her picture work, she desires that she shall not be named—but she is one of the real stars of the film.

“The average stock actress has a lot more trouble with her costumes than she has with her lines. And she thinks her troubles are the worst,” declared this actress. “But the stock leading lady has a comparatively easy time when compared with the picture player.

“Did you ever see your favorite staress in the same gown twice?”

“You never did. And, furthermore, you never will. She wouldn’t scintillate long if she wore the same gown twice. The stock actress when she gets tired of buying new gowns can go to a different town and wear her old dresses all over again, with a little fixing over.

“But the motion picture actress cannot do that. Her public follows her from place to place. I have worked for five motion picture companies—but my public has been the same. I’m glad to say my public has grown a lot in numbers since I started motion picture work. But the point I want to make is that I can’t change my audience like the stock actors. The same people go to see my pictures.
“And, furthermore, none of my stock wardrobe—the gowns I wore in stock company productions—will go in pictures because the public has seen me in all those gowns! The result is that every time I put on a picture I have to put on several gowns.

“And believe me, the public is becoming rather captious as to the number of gowns one must wear in the various scenes of a picture. We must appear in a different gown for every day the picture is supposed to cover.

New Dress for Each Day.

For instance, if I am to appear in scenes covering several days I must have a new gown for each of those days. It wouldn’t be right for me to appear in the same gown two days in succession.

“It seems absurd, of course, in parts where the character is a girl in moderate circumstances. I know that before I went on the stage, I considered myself lucky to have half a dozen gowns—one of which would be a regular-honest-to-goodness stylish affair. And when I went out I wore that stylish gown time after time. I couldn’t do it with the same sort of a character, in the same situation in life. In motion pictures though, I must have a new gown for every day the action covers.

“And the quality of the gowns must be right. You hear a lot about ‘Lucile’ and ‘Redfern’ creations on the screen, and you think the labels are sewed on by press agents instead of the people who own the copyrights to them. But that is not true.

“The public demands ‘Lucile’ and ‘Redfern’ and all the rest of them. And we must furnish them. It’s a horrid shame, too. I actually spend more time with a dress maker than I do with the play I am appearing in.

“I would ask a young girl anxious to go into pictures if she can stand quietly day after day and permit herself to be draped and stitched and pinned into something she must pay for, but will never have an opportunity to wear—nine cases out of ten—because she can’t afford to go where the gown belongs? That is totally aside from the business of trying to figure out something new.

“That is one of the real tests. One of the things I want to take a vacation from is gowns. Honestly, I almost cry when I think of a new play. It means new gowns—more gowns—and I’ve got so many already that I can’t do a thing with!”

Mrs Daffodil’s Aide-memoire: Poor thing! Sacrificed to the relentless whims of the public! What a horrid nuisance, having to be fitted for all those Redfern and Lucile confections! The anonymous narrator may be one of the genuine “staresses” of the Silver Screen, but she seems to be ignorant of the well-known solution to the problem of her bulging wardrobe: the second-hand clothes trade. This well-known dealer reported a brisk trade with stage actresses:

I deal extensively, too, with actresses. They can find among the stock of stage dresses gowns that are suited to the role they are to play, and the reduced cost of which is very gratifying both to their managers and themselves. In fact, the stage dresses go back and forth among the actresses, many times before they begin to show wear. I act the part of the middleman, you see, in these cases, and get paid for the bother of caring for the garments properly while they are here awaiting a new purchaser in the interval when they are not being worn on the stage.

Some of these richer gowns are sold to me by actresses who have no need for them off the stage, and dispose of them as soon as the play in which they were worn has run out its course at the theater.” The Cincinnati [OH] Enquirer 9 May 1891: p. 1