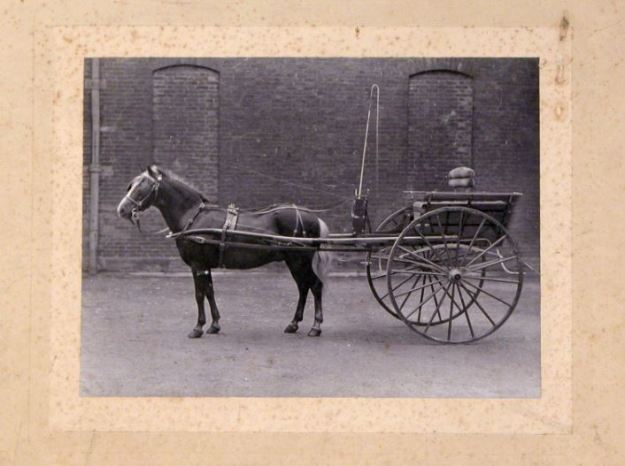 My next tale has always seemed to me one of the most interesting psychic experiences that I have ever heard related.

Some few years ago, a young officer, whom we will call Lestrange, went to stay at a country house in the Midlands. It may be said that he was a good type of the average British subaltern, whose tastes, far from  inclining towards abstract study or metaphysical speculation, lay chiefly in the direction of polo, hunting, and sport generally. In fact, the last person in the world one would have said likely to “see a ghost.”

One afternoon during his visit, Lestrange borrowed a dog-cart from his friend, and set out to drive to the neighbouring town. About half-way there he saw walking along the road in front of him a very poor and ragged-looking man, who, as he passed him, looked so ill and miserable that Lestrange, being a kind-hearted person, took pity on him and, pulling up, called out, “Look here, if you are going to C—-, get up behind me and I will give you a lift.” The man said nothing but proceeded to climb up on the cart, and as he did so, Lestrange noticed that he wore a rather peculiar handkerchief round his neck, of bright red, spotted with green. He took his seat and Lestrange drove on and reaching C—- stopped at the door of the principal hotel. When the ostler came forward to take the horse, Lestrange, without looking round, said to him: “Just give that man on the back seat a good hot meal and I’ll pay. He looks as if he wanted it, poor chap.” The ostler looked puzzled and said: “Yes, sir; but what man do you mean?”

Lestrange turned his head and saw that the back seat was empty, which rather astonished him and he exclaimed: “Well! I hope he didn’t fall off. But I never heard him get down. At all events, if he turns up here, feed him. He is a ragged, miserable-looking fellow, and you will know him by the handkerchief he had round his neck, bright red and green.” As these last words were uttered a waiter who had been standing in the doorway and heard the conversation came forward and said to Lestrange, “Would you mind stepping inside for a moment, sir?”

Lestrange followed him, noticing that he looked very grave, and the waiter stopped at a closed door, behind the bar, saying: “I heard you describe that tramp you met, sir, and I want you to see what is in here.” He then led the way into a small bedroom, and there, lying on the bed, was the corpse of a man, ragged and poor, wearing round his neck a red handkerchief spotted with green.

Lestrange made a startled exclamation. “Why, that is the very man I took up on the road just now. How did he get here?”

He was then told that the body he saw had been found by the roadside at four o’clock the preceding afternoon, and that it had been taken to the hotel to await the inquest. Comparisons showed that Lestrange had picked up his tramp at the spot where the body had been discovered on the previous day; and the hour, four o’clock, was also found to tally exactly.

Now was this, as the ancients would have told us, the umbra of the poor tramp, loth to quit entirely a world of which it knew at least the worst ills, to “fly to others that it knew not of”? Or was it rather what Mr. C. W. Leadbeater has described in his book, “The Other Side of Death,” as a thought-form, caused by the thoughts of the dead man returning with honor to the scene of his lonely and miserable end, and thereby producing psychic vibrations strong enough to construct an actual representation of his physical body, visible to any “sensitive” who happened that way? We must leave our readers to decide for themselves what theory will best fit as an explanation of this strange and true story.

Mrs Daffodil’s Aide-memoire: Mr. C.W. Leadbeater was a Spiritualist and influential member of the Theosophical Society. He wrote extensively on esoteric subjects such as the astral plane, clairvoyance, and reincarnation. Mrs Daffodil sees no reason to drag “psychic vibrations” or “thought-forms” into a perfectly good English ghost story.