The Picturesque Frocks a Brunette, Chatain and Blonde Will Wear to a Hallowmass Party.

Halloween, perhaps, more than any other fete, supplies possibilities for picturesque and effective gowns, and the end-of-the-century girl is not the one to let them slip by.

A very fashionable wardrobe now owns, along with other dainty evening toilets, a Halloween supper frock, which may be made in any mode, but which, to be just the thing, should suggest, in some way, night itself. Tints vague and intangible, hinting of darkness or the white cool moon, are preferred over glaring dark colors.

As to ornament, there may be some curious jeweled night fly fastened somewhere, perhaps spangled in the hair; and if flowers are used, they too, must propitiate the powers of night in wanes and thick perfume.

The dread witches, who on All Halloween have the threads of fate in their keeping, are said to be difficult ladies to please, but somehow one hopes they will smile on the wearers of the three charming gowns here shown, and provide them suitable husbands. The originals of these dainty costumes, which were suggested by three famous French pictures, were all made by a nimble-fingered New York girl for a Halloween supper. They are to be worn by herself and two sisters, three distinct types; and along with their exceeding effectiveness, they have the merit of having involved comparatively little expense, being all fashioned from materials at hand, some lengths of a marvelous Chinese drapery, a few yards of thick liberty satin bought in better days, and a thin, scant, old tambour muslin slip, relic of a long dead great-mamma and tea cup times.

The first dress shown was for the dark, handsome elder sister of the little Cinderella dressmaker—the type that goes with stiffness and stateliness and rustling textures. It was of the liberty satin in a dim luminous tint, too blue for gray and too gray for blue, and that will show off the wearer’s rich skin to perfection. The girdle drapery of graduating ribbon lengths and bows was of a faint dead sea rose color. This subtle and delightful tint, together with black, repeats itself in the simple but decorative embroidery at the bottom of the wide skirt. The tiny chemise gamp is of white muslin, and the short balloon sleeves are stiffened with tarlatan. To be worn with the dress, as well as the next one, both of which were entirely uncrinolined, were petticoats of hair cloth, with tucks of large round organ pipe plaits, to hold the skirt out in the present approved fashion. 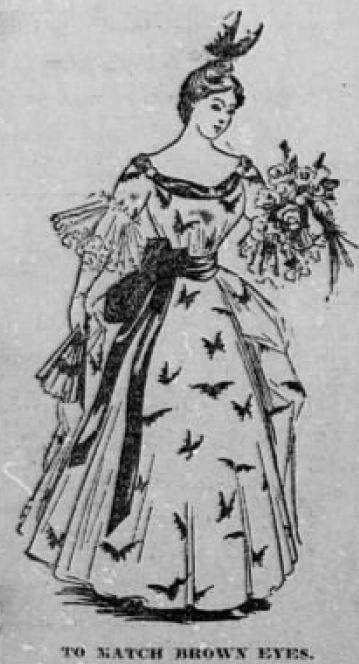 The second gown, though perhaps not quite so enchanting as the first, was more suggestive of the witcheries of Halloween. It was of the Chinese silk drapery, in the copper red, and with a fantastic patterning of black bats. The girdle and low neck decoration are of black velvet, and square jet buckles fasten the latter down at intervals.

The very daintiest feature of this paniered gown, however, which in style recalls somewhat little beflowered Dolly Varden, is the undersleeves, made to show off a rounded young arm and drive envy to the soul of womankind. For every woman who is a real woman has a weakness for lace, and these adorable undersleeves were made of the charming old net lace embroidery in back stitch of the long ago.

It came, like the tambour muslin, from grandmamma’s garret, where, when Halloween is over, it is to be hoped, it will be carefully put back.

A GOWN FOR A BLONDE.

The third and last dress, a tiny hint of the Directoire period, is the tambour muslin slip itself, sinfully modernized. Once white, it is now evenly mellowed to a soft caressing yellow, which is further accented by a puffing of pure white chiffon about the neck and skirt bottom. The sleeves are of a rich heavy brocade in black and white, and the belt and crescent ornaments are of silver.

This costume is to be worn to the supper by the little dressmaker herself, and its scant picture lines are sure to become her slim, shortwaisted young figure.

And may the ghost of sweet dead grandmamma not come back to reproach her for desecration.

Mrs Daffodil’s Aide-memoire:  Desecration, indeed….  One frequently sees examples of ancient garments re-made into fancy dress or some “amusing” pastiche; a practice which makes Mrs Daffodil’s blood alternately boil and run cold (something that takes rather a bit of doing, given her line of work.) We can only fervently hope that the antique lace and tambour muslin were, indeed, “put back” or, if not, that Grandmamma haunted the offender mercilessly.

While questioning the appalling statement that only “real women” have a “weakness” for lace, Mrs Daffodil will also adjudge the addition of antique lace to an otherwise standard Bat Queen or Empress of the Night fancy-dress costume to be utterly unnecessary.

“Night” was a popular figure in fancy dress. We see an interpretation of that character at the head of this post. An illustration and description of another version follows. Whimsical though the idea is in principal, in real life, wearing a stuffed owl must be a trifle cumbersome:

By way of preparation for it we present for our readers’ inspection a costume representing Night.

It is satin, in two shades of purple. The lighter used for lower skirt has beaded surface. The plain falls over in a plaited back and draped front; wide panel ornamented with stars, butterflies [moths?] and a very demure owl; smoke-colored vail, dotted with stars, covers the crown of hat, held by a crescent and owl; this draping over the right arm and breast, is thrown over the left shoulder and arm. Willkes-Barre [PA] Evening News 6 January 1886: p. 3