Her rainy-day suit trimmed with buttons.

Craze Has Struck Town with “Let’s Get Married” for a Record.

TEN TO ONE OF IT SOLD

Girl Who Wears 500 and Weighs as Much as a Museum Woman.

The button fad has struck the town at a gait that Trilby’s shoes might envy. Were that woman more youthful she would add a sabre to her military coat and go out and fight for her laurels upon the field of fadism.

The button girl has sprung up, like the button, in a day, and instead of being decorated with flags and campaign ensigns, she is wearing buttons! If the button-makers have been wise enough to have a political sentiment engraved upon the little pearl colored ensign, well and good! You may read “I’m a silver man; papa’s for tin,” as you ride down; in the cars of a morning. And if the local button-maker has made a certain stamp of button you may see “Gold’s good enough for me” under the ripe chin of a pretty miss on her way to a political meeting. But the buttons mostly are non-sectarian, as an old lady remarked as she read the Inscriptions upon the buttons of her granddaughter’s button collection. “There’s everything from ‘Put a penny in the plate’ to ‘Sunday-school’s out.'”

There is one style of the button girl, the girl who loves buttons. She takes up the craze less as a fad than as a real fancy. She likes to own the buttons and caresses them as she would cancelled stamps or worn-out coins. They are so pretty, she thinks.

This style of young: woman is the one who carries on her conversation by buttons. They save breath and are so realistic. Like an Illustrated song!

To a caller dropping in for lunch she can say: “Ginger-snaps, fresh to-day.” And to the guest at parting she can point to a button that will remark: “Stay longer next time.” And when looking in her own mirror a minute later she can point to a reflective button, “Glad she’s gone.” This is for the girl who loves her buttons and finds company in them. They meet any and all occasions.

A gentleman entering a dry goods shop went to the notion counter for some trifle. Behind it stood a pretty girl. Her breastpin was a button, “Meet me Sunday.” And for cuff buttons she had: “Will you go treat?” and “I don’t know the way home.” These rather embarrassed the gentleman, but when the girl turned around he read: “Now’s your time.” And when she flashed her head around, her neck ribbon was fastened at the side with “Caramels, please,” and “Soda, five cents.”

This settled the gentleman. He walked out without the spool of thread and went home to tell his wife, only to learn that the button fad had struck the town and he had encountered the first installment of it.

There are decorative buttons that trim a gown. These are purchased by the hundred at so many for a cent. They are for the girl who wears a great many buttons–in fact, dresses in them.

The pyramids upon the vest were the most interesting. At the top you read: “A policeman will take me home.”’ Below you saw: “Bloomers under this skirt,” and by the side of this interesting announcement, “My feet are wet” and “One of my legs is really longer than the other.”

As the pyramid grew in proportions the announcements became still more entertaining. The bottom row said: “Does your umbrella leak?” “Make room for me.” “Home’s the best place.” “Wish I didn’t work.” “Don’t you hate rain?”

The lower pyramid went on in the same diverting strain until you gladly read as the bottom button: “Guess I’ll get out here.”

“This is my corner,” was the announcement on her hat.

The feature of the button fad is its personality. Like Li Hung Chang, [Chinese politician and diplomat, who toured Europe and North America] the button is privileged to ask almost any question without rebuke. The simple, “Do you own your bike?” is passed by unnoticed. And “Don’t puncture your tire” is taken in the spirit in which it is sent–that of general advice. The button has its mission as well as its peculiarity.

The largest number of buttons that could be worn was determined by the girl who piled 500 upon her dress. She was the one who clothed herself, so to speak, in buttons. Her only other adornment being a simple black dress. The buttons did the rest. Each button weighed a large fraction of an ounce, so her weight was increased many pounds avoirdupois.

Many girls who will not wear buttons openly slip them under the lapels of their jackets, and when you pass them the wind will take the lapel and flip it forward and you will read: “Meet me at the Bargain Counter.” Under the other lapel you will catch “Stop Winking at Me.”

“Take Off Your Hat,” “Here Comes a Lady,” are twin buttons standing side by side where you can see them, as the obliging lapel stays back. And hidden almost in its depths is the modest declaration, “No Man Ever Kissed Me.” This is the button craze as exemplified by the retiring girl who would not for the world wear her buttons outside. Too much like wearing her heart upon her sleeve!

Charming little buttons come, for underwear. Girls know all about these buttons. Get some girl with a pronounced attack of the button fad to tell you. She wears buttons on her underwear, you can be sure. Without being vulgar and without violating the proprieties you may know that one of them says “This is a bicycle corset,” and another declares “Ribbons on everything.” “I like violet best” is a statement you see peeping out of the neck of a morning gown, and if the gown be a folded one in front you may catch a gleam of “Here’s my heart.” “I’m the youngest of the family” is another confidential remark told by a sly button.

The button fad is not to be condemned, for it entertains, and that is more than can be said of most fads. It is a useful one, too, for the buttons are pins, and what would we do without pins? Men wear these pins under their, coat lapels and outside. And they lodge them in their cravats and even decorate their trousers bands with them. “I’m a Samson” holds up the trousers band of a young Yale wrestler, and “I’m Sandow’s Cousin” [Eugen Sandow, a German athlete and strongman] trimmed a sweater in which a Harvard oar’s football man rested.

“Tell Your Troubles to a Policeman” keeps many a bicycle cap in shape. And now you see “This Lady’s My Sister.”

“I Want a Match” is worn by girls, and “Please Help Me Mount” is another legend of the fair one.

The button fad enriches many a manufacturer, for there are 500 button businesses in the United States and this means many a factory. The materials are cheap, but the workmanship is complicated. Every button passes through ten pairs of hands before it can come to you marked “I’m All Right;” and “Go to L” is sadly marred and disfigured if you get it before the polish has been put on. The Chimmy Fadden [a “Bowery boy” character, from the Chimmy Fadden stories by journalist Edward W. Townsend.] button is a popular one. One dear old lady wore “What t’ell” for some weeks, upon her cap strings before she knew what it meant. “I thought it was the old-fashioned ‘What tell?’” said she, blushing for the first time in fifty years, when the literal translation was laid before her. “And the little button was so becoming to the strings,” she said regretfully, as her grandson put it on and went out.

“Let’s get married,” is the button that wears the medal record as the world’s record breaker. And next to this comes “Let’s kiss.”

There is no lesson to be learned from this. But the trend of popular admiration can be noticed from it. The boys in the street sell “You’re my pretty girl” three to one of almost any other, and nine girls out of ten purchase “Love me, love my dog,” instead of “The Church Bell is ringing.” Truly love has always been the maiden’s as well as the poet’s theme.

A button box with the new girl does not mean the amiable old cracker box, willed to her from her grandmother, in which she keeps a miscellaneous assortment of buttons for yawning places. It means a nice little cabinet for buttons with a legend upon them. And the time-honored penny box means the money she is saving to buy more buttons.

Mrs Daffodil’s Aide-memoire: Mrs Daffodil is quite fond of topical fads of this sort, which have their wild hey-day, only to be relegated to the dust-bin of History in a few months’ time. How many of these buttons survive, either in the historian’s notes or in a glass case in a museum?

We do find a few remnants of the fad: hikers and Volksmarchers assiduously collect buttons to show where they have been. The young lady, who trimmed her “rainy-day” suit with buttons would have found herself in congenial company with London’s Pearly Kings and Queens, who still reign in button-clad splendour to-day.

To be Relentlessly Informative, the “Trilby shoe” was a model with a very pointed toe named for the wildly popular novel by George du Maurier. Trilby has “the handsomest foot in all Paris.” 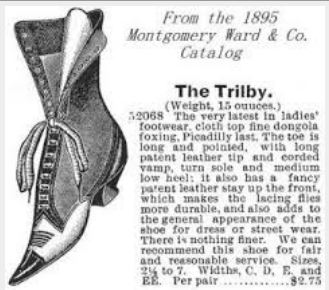 McClure & Eggert, the enterprising firm of Shoe Manufacturers of our city, have just gotten out a Trilby Shoe in button and lace. It is a beauty, made on a new needle-toe last. Paris vamp, nice long tip; made out of a fine kid. The Buffalo [NY] Commercial 23 February 1895: p. 5

Mrs Daffodil is struck by how many of the button slogans are either highly indiscreet or could be read as double-entendres. “I want a match” might mean that the naughty young creature smokes or that she is unabashedly in the marriage market. Sly, indeed, although Mrs Daffodil suggests that “cheeky” is the mot juste.