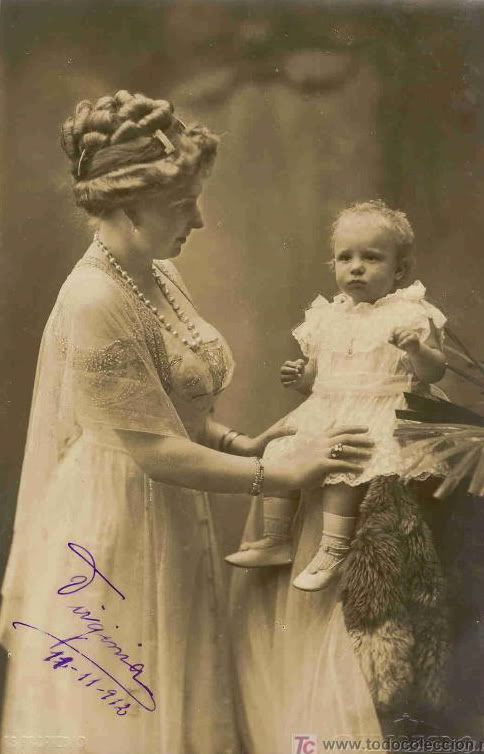 Queen Victoria of Spain and her son, Infante Alfonso, Prince of Asturias

In honour of Mother’s Day, which is being celebrated to-day in the States, a rosy look at the nursery lives of the royal families of Europe just before the Great War.

It is generally supposed that royal mothers are able to devote very little time to their children, but this is far from being the case.

Royal children nowadays see quite as much of their parents as the children of wealthy families, writes a London correspondent of the New York Sun. Most of the queens and crown princesses in Europe at present are domestically inclined and have no yearning for banquets and functions, preferring the nursery and its pleasures.

Queen Mary of England will of course go down to posterity as a model mother, if a somewhat severe one. She keeps in such close touch with her children and their interests that she has no time for personal friendships and really divides her life between her family and the state.

The czarina [Alexandra] of Russia, until her health broke down recently, had no thought outside her children and spent whole days with her four daughters and the adored czarevitch. Even now that she has become a confirmed invalid and it is thought wiser that she should not have them with her so constantly, her one desire is to know what they are doing and her one happiness in the day, the few moments when they come and talk with her.

The Queen of Italy [Elena of Montenegro] is still another mother who has watched over her little ones since their infancy, personally directed their lives, nursed them through childish ailments and taught them their first games.

These royal mothers, however, rarely parade their maternal devotion. They are seldom photographed with their sons and daughters, nor are they seen much with them in public. The opposite is true of the queen of Spain [Victoria Eugenie]. She goes about with her children constantly, drives through the streets with them to the great joy of the Spanish people, and is eternally being pictured with one or all of her small family.

This does not mean any less devotion in private, though, for Queen Victoria of Spain is a most careful mother, always supervising the diet and daily regime of the little princes and the princess and taking her greatest pleasure in devising new games for them or surprising them with wonderful toys.

As a girl she was devoted to children and always declared Queen Mary, then Princess of Wales, her ideal mother. In fact, she used to announce that she intended to have just as many children as her royal cousin and would bring them up in the same way and it would seem that she is on the road to that achievement.

But, unfortunately, while Queen Mary’s children are hardy and healthy, Queen Victoria’s little ones are not. The oldest boy, the Prince of the Asturias, is far from robust, while Don Jaime, the second, is practically dumb from a disease of the glands of the throat, and the little Infanta Beatrice, too, needs the most incessant care and attention.

The crown princess of Sweden, who was Margaret of Connaught, is another much photographed royal mother. She is tremendously proud of her sturdy youngsters, cannot bear being separated from them and manages always to take at least one with her even when she goes on state or private visits.

She brings up her children on the simplest of foods, the airiest of nurseries and the daily walk or drive in rainy or sunshiny weather. But she has never had to struggle against prejudice, as did her cousin of Spain. Sweden was quite prepared to believe in English methods of child rearing, whereas Spain was horrified at all Queen Victoria’s nursery innovations and thought it was shameful that children of the royal blood should be treated in such wise. [The Queen dismissed the nursery nurse. The horror!]

The queen of Holland [Wilhelmina] is one of the proudest and most adoring mothers in the world. Upon Princess Juliana rest all her hopes and all the hopes of the Dutch people and never was a baby more idolized. She is too young as yet to be spoiled, but even now she realizes her power and rules her father and mother and the entire palace kindly, but firmly.

The crown princess of Germany [Cecilie of Mecklenburg-Schwerin] is more fond of life and gayety than the other royal mothers mentioned. She lives in a perfect whirl of pleasure and excitement, is famous as the best-dressed princess in Europe and loves horses and sport, yet she finds time to be much with her boys. When they are all in the country she takes long walk with them and has taught them croquet and tennis.

She does not personally supervise their diet and general nursery regime, but she knows at once if all is not going well, and woe betide the person to blame.

In the Palace at Athens.

Prince and Princess George of Greece are a very devoted father and mother. In fact they are most domestic anyway and lead the quietest of lives. The princess bathes her children herself and goes about with them in the palace grounds or has them with her when she takes her afternoon drive.

Queen Maud of Norway and her son, Prince Olaf, are inseparable companions. They ride in the early mornings and after lessons are over for the day Olaf has two hours with his mother and in that time they read aloud or talk or play games and are perfectly happy.

The king [Albert] and queen [Elisabeth] of Belgium are training their children very carefully and they spend much time with their boys and their one girl. Their home life is very simple and quiet and Belgium finds it a relief to have a domestic royal family after the excitements and scandals of King Leopold’s reign.

King Leopold was dubbed “The Belgian Bull” for his many indiscretions. Mrs Daffodil will not describe his vile wickedness in the Congo; it would cast a pall over the day. What the article  above omits is the haemophila of the young Spanish Prince of the Asturias and his brother’s deafness, the repeated miscarriages  of Queen Wilhelmina, the badly spoilt Prince Olaf, the unhappy marriage of Princess Cecilie and her sons’ alliance with the Nazis, the unfortunate character of Queen Mary’s eldest son, the dreadful death of Queen Elena’s daughter at the hands of the Germans, and Empress Alexandra’s sorrow over her son’s illness. Although  shielded from the frets of daily life by their wealth and power, these were not proof against the many worries and sorrows of motherhood.