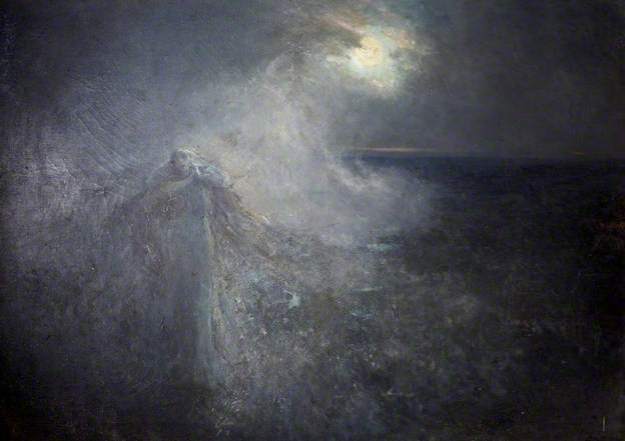 The Wail of the Banshee, Clifford Boucher James, https://artuk.org/discover/artworks/the-wail-of-the-banshee-waving-her-hands-and-chanting-a-sweet-song-of-life-94880/view_as/grid/search/keyword:banshee/page/1

THE BANSHEE OF HILLSTOCK ROAD.

Hillstock-road was about the last place in the world that a self-respecting banshee or other supernatural visitant might be expected to patronise. It was not even in Ireland, but in the North district of busy, smoky, up-to-date unromantic London.

Grendoran Villa, Hillstock-road, was rented by Mrs. O’Shea, an Irish lady of good means, and immense antiquity —as regarded family. Mrs. O’Shea was the widow of a general officer, as she took good care to inform her neighbours, upon whom she looked down with justifiable contempt as being principally composed of business people. None of the O’Sheas had soiled their hands with trade; but in Mrs. O’Shea’s native country there were those so ill-natured as to whisper that the late General O’Shea had found means to escape from his creditors by marrying the heiress of a wealthy Hibernian bacon merchant.

The household of Grendoran Villa consisted of the stately widow, an orphan niece, and two servants—one a confidential maid, who had lived with Miss Molly Dowd before her marriage to the aristocratic and impecunious Major O’Shea. Honor Carroll was a character in her way, but under a sharp manner and tongue hid a warm heart and much fidelity. She had served the Dowds from her youth, and was as careful to preserve her mistress’s status as was that lady herself. Until very recently, Honor had never disputed Mrs. O’Shea’s will, except by the grumbling which had become habitual with her; but now there was a difference of opinion between mistress and maid, and Honor held her own obstinately, for the happiness of Katherine O’Shea, whom the old woman idolised, was at stake. Katherine was not an O’Shea at all, but merely a Dowd, being the only child of Mrs. O’Shea’s brother; but on the death of her parents, her aunt had adopted her and given her the grander name. She was a typical Irish girl, sad and merry by turns, with a wholesome horror of restraint, and but little reverence for authority. She was pretty, with dark eyes and hair, small features, and a remarkably bright and clear complexion. The girl had no nonsense about her, and cordially detested her aunt’s snobbishness. She had a special reason for rebelling against the enforced gentility of her position, as it had led Mrs. O’Shea to refuse her consent to the proposal of Katherine’s lover—a young man in every way a suitable match for her, but to whom the General’s widow objected on the score that he and his people were “mere tradesfolk.”

Honor Carroll had taken the side of the young people, and uttered her protests with no uncertain voice, and her remarks were as thorns in Mrs. O’Shea’s side, for the home truths she advanced were incontrovertible.

It was a dull November afternoon, not by any means the sort of day one would select for an al fresco conversation; yet Katherine O’Shea and Henry Plavell were standing under the leafless elm trees at the end of the garden, and apparently perfectly unconscious of either cold or damp. Very frequently the young man paid these visits, safe from the observation of the mistress of the house. Honor, while scolding Katherine briskly for meeting her fiancé, secretly kept watch that Mrs. O’Shea did not come upon the scene unawares, and at the time of which we are speaking she was on duty.

The sound of the drawing-room bell warned her that Katherine would probably be asked for by her aunt; and the old servant trotted down to the lovers’ meeting-spot, and, without any preliminaries, began:

“Shure, an’ Miss Katherine, isn’t it a shame fur ye to be meandering down there wid Master Flavell, an’ ye know that the mistress is dead agin him comin’ at all?”

“Don’t be cross, Honor,” replied Katherine, with an unconcerned laugh. “If I am not to receive my visitors properly inside, I’ll take good care to enjoy myself out here.”

“It’s cowld enjoyment, I’m thinkin’,” muttered the old woman; “but in wid ye now, fur the drawin’-room bell’s rung, and the mistress is shure to be wantin’ ye.”

“I expect it’s you she is wanting, Honor,” remarked Henry Flavell. “Don’t you think Miss Katherine might stay out a little longer?”

“Bedad! I do not, Master Flavell,” answered Honor, sharply, “an’ it’s yerself ought to be above matin’ her on the sly.”

“Did you never meet anyone on the sly yourself, Honor?” laughed the young man.

“Ach! Go along wid ye,” grinned Honor, her eyes brightening up with some merry thought of her girlhood. “Better fur ye to persuade the mistress to let ye court Miss Katherine straight out. Och! Murder! Ay she isn’t at the winder! I towld ye how it would be.”

Henry Flavell dodged behind the tree in very undignified style, while Katherine and Honor walked towards the house.

Mrs. O’Shea never for a moment dreamt that Henry Flavell would dare enter her grounds after she had forbidden him the house; therefore, her suspicions were not roused, and she only scolded Honor for not having more sense than to be out that cold day without something over her head.

It was the evening of the same day, while Honor was helping her to get ready for bed, that Mrs. O’Shea began to hold forth upon the presumption of a person in “young Flavell’s position” attempting to pay his addresses to her niece.

“An’ a fine young man he is, whin all’s sed an’ done,” put in Honor, sturdily. “Faith! I see no great harm ay Miss Katherine an’ he made a match ay it.”

“How dare you, Honor!” exclaimed Mrs. O’Shea, with a withering look at her maid. “My niece shall marry as well as I did, or remain an O’Shea all her life.”

“Honor!” screamed Mrs. O’Shea. “If you ever dare to mention that shop, or let Miss Katherine know of it, I’ll send you back to Ballymorty. Have you no respect for me at all?”

“They shall never marry while I draw breath.”

Before her mistress could retort, a weird, wailing sound came borne on the still night, and died away like a plaintive cry. There was not a breath of wind, and Mrs. O’Shea turned pale and grasped the back of the chair, while Honor devoutly crossed herself and whispered:

“The holy saints be betune us an’ harm this night!”

“It’s like a banshee,” stammered Mrs. O’Shea, when she had recovered her voice. “There’s one in our family. It’s a warning.”

“I am only doing my duty,” remonstrated Mrs. O’Shea, faintly.

“It must come three times,” remarked Mrs. O’Shea, referring to the banshee.

And sure enough, the following evening, about the same hour, the uncanny, unaccountable, prolonged wail came again; and Mrs. O’Shea, trembling and unnerved, accepted it as her summons. Honor Carroll, while admitting that it was the banshee, hazarded the remark that if approaching death were sent as a punishment for crossing the young people, speedy repentance on the part of Mrs. O’Shea might turn back the judgment.

Mrs. O’Shea was too fond of her present existence to care to change it, unless that was absolutely necessary; and she there and then made a solemn vow that if she were spared until the morrow, she would give her consent to the mesalliance in the hope of propitiating the banshee.

She did not sleep that night, but she lived through it; and to the great surprise and joy of Katherine and Henry Flavell, the old lady wrote a formal acceptance of the young man’s proposal,

It need not be explained that the supposed banshee was nothing more supernatural that the sound emitted by the new motor cab invested in by Mr. Flavell, senior.

Mrs Daffodil’s Aide-memoire:  Although she is not fond of dialect stories, Mrs Daffodil is pursing her lips dubiously at that extraordinarily abrupt and unsatisfactory denouement in the worst tradition of the “and then I woke up” ghost story ending.  Mrs Daffodil, and, doubtless, the redoubtable Honor Carroll, would have been much happier if there had been a banshee. Mrs O’Shea would have been found dead in her bed and young Katherine would not only have been free to marry the man of her heart, but would have inherited the O’Shea fortune.  Even after years of respectable widowhood at Grendoran Villa, there should have been a substantial sum left from the labour of that wealthy Hibernian bacon merchant. Honor Carroll, after a period of luxuriant mourning, might have stayed on to help with the children or retired to Ireland with a generous legacy. As a bonus Henry Flavell would have been free from the plague of a snobbish mother-in-law.

That is what Mrs Daffodil calls a happy ending.