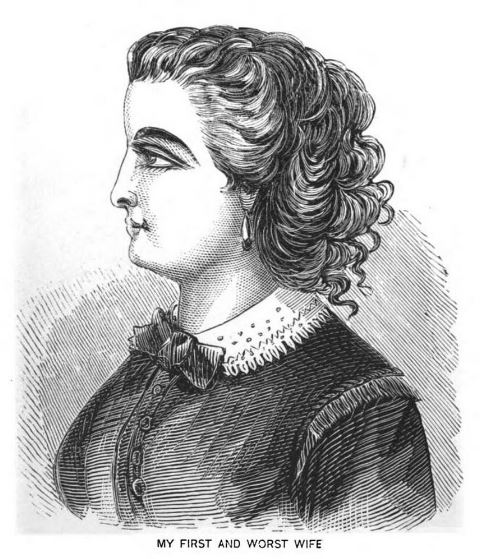 A young woman had continued to linger in the parental household until she had considerably passed the average age of marriage. Somehow the young men of her acquaintance had failed to appreciate her. Therefore it was all the more gratifying when a recent arrival in the community, a man of ingratiating appearance, began to pay her marked attentions. Her romantic impulses which had been subdued by untoward circumstances, could now be given full sway. Her admirer was impetuous and would hear of no delays, and they were soon married.

The historian does not furnish any details of the honeymoon nor how long it lasted, but it would appear that the bride, although of a clinging nature, was very curious as to her husband’s antecedents, and this, unfortunately, was the weak spot in his armour. The more the aforesaid antecedents were investigated, the more unattractive they proved to be and within a very short time the bride indignantly refused to have any further dealings with her husband, incidentally starting a line of inquiry with startling results; the man was apparently a bigamist.

With indefatigable zeal, the bride and her disgusted parents continued their investigations which soon resulted in the bridegroom being snugly established in the local jail.

Then followed a remarkable series of revelations. A wife was discovered at about every turn in the crooked path of the prisoner, who engaged a lawyer and resigned himself to the inevitable.

Some months were to elapse before a regular session of court and in the meantime the bridegroom found time hanging heavily on his hands. Apparently the game was up and, with the inordinate vanity of certain criminal minds, he decided to write an autobiography. In due course of time there appeared a remarkable book, entitled, “Seven Wives and Seven Prisons,” which created a sensation. It also aroused much local feminine indignation, because, in his desire to “get even” with his last wife, whom he regarded’ as responsible for his present misfortunes, the bigamist declared in his book that of all the wives he had ever had, she was not only the most disagreeable, but also the homeliest and the most generally unattractive.

Mrs Daffodil’s Aide-memoire: While this sounds simply like an amusing anecdote, there truly was a book called Seven Wives and Seven Prisons or Experiences in the Life of a Matrimonial Monomaniac. A True Story, by L.A. Abbott, 1870. The book, the story of a man who just couldn’t say no, complete with “spoiler-alert” chapter headings, has been classified as both a novel and as a memoir. Perhaps the most charitable thing Mrs Daffodil could say about it, is that it makes for compulsive reading.

There was no shortage of such matrimonial monomaniacs:

One James Flatherty was brought up before a magistrate for marrying six wives. the magistrate asked him “how he could be such a hardened villain?” please your worship,” says James, “I was trying to get a good one.” Vincennes [IN] Gazette 20 February 1868

A man in Zanesville, Ohio, who has buried three wives, has their photographs in a group, within which his own picture is the center figure, and underneath is this touching inscription: “The Lord will provide.” San Francisco [CA] Chronicle 12 November 1871: p. 2

A Marrying Man. —The Utica Gazette cautions ladies against one Hiram N. Barnes, a hatter. He has already had five wives. The Liberator [Boston, MA] 26 June 1846

One Robert Cleneay was recently arrested near Atlantic City, New Jersey on charge of having married a widow while he had five other wives living. He confessed he had had the wives, but said he thought they had all died of broken hearts when he ran away from them. Savannah [GA] Daily Advertiser 12 April 1871: p. 1