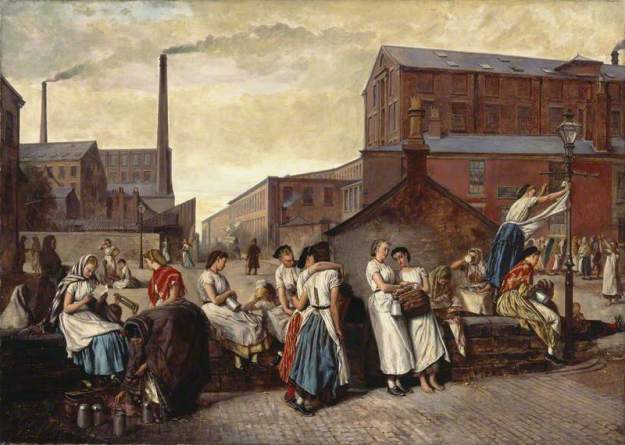 “I understand, then, you mean an elopement? Oh, surely, surely, Gerty, you never can be in earnest?”
Gerty Fane sat on a fallen log. whose mossy cylinder was half hidden in tall, plumy ferns, and where the trembling July sunbeams rained down through soft summer foliage like a cascade of gold. An artist would have painted her as a wood nymph. with her hair of braided sunshine, her deep, limpid eyes, and the peach-like bloom upon her perfect cheeks.
And yet this dew-eyed beauty was neither more or less than a factory girl, who worked a machine in the big shop whose gray stone chimneys rose out of the hollow below, at a dollar a day; a girl who had grown up on a diet of yellow-covered novels, and dreamed of knights and ladies and perilous adventures.
“Yes,” said Gerty, lifting her dew-blue eyes, “an elopement. Isn’t it romantic? And isn’t he handsome?”
Sarah Willis looked sadly down into the eyes that were so like blue flowers
“Gerty,” said she, “I beseech of you to think twice about this business. Have you forgotten Francis Tryon?”
“Francis Tryon! Only a cutter in the shop!”
“An honest, honorable man,” said Sarah, impressively.
“Why don’t you take him yourself, since he is such a paragon?” retorted Gerty, saucily.
“Because he loves no one but you.”
“Then he may leave off loving me at his leisure,” said Gerty. “I don’t care a fig for him, and never shall. I am going to marry Mr. Montressor; and I never would have told you of the elopement if I had supposed you were going to be so ill natured about it. My father is as unjustly prejudiced against him as you are, and so I am driven to it.”
And Gerty Fane tried to vail her exaltation beneath a tone of injury as she rose up and began to make her way through the tall ferns. Sarah looked wistfully after her.
“A spoiled, harmless little beauty!” she said to herself. “But Mr. Tryon was kind to me when I came here friendless and alone; and Mr. Tryon loves her; for his sake I will not stand quietly by and see her rush on to ruin.”
“You see,” Gerty Fane had told her, confidentially, “I am to go to the shop on Wednesday, just as usual, so that my father will not suspect anything, and then I am to feign a headache, just at train time, and leave work, step quietly on board the train, and go to Pittsburg; there I stop at the Hapgood house. He comes there the next day, and we’re married; and then we shall go to Saratoga, or Newport, or Long Branch, or some of those aristocratic places; and won’t it be charming?”
But Sarah Willis shook her head dubiously.
“I don’t like Mr. Montressor’s looks,” said she.
“He’s just exactly like that picture, ‘Lord Byron,” in the ‘Poets of England,'” retorted Gerty, triumphantly.
“He is only a traveling salesman.”
“But he’s to be a partner in the firm in the fall. He told me so himself, and he showed me the photograph of his employer’s daughter, who is madly in love with him.”
“Why don’t he marry her, then?”
And now Gerty dimpled into radiant consciousness. “I suppose because he likes me best.” said she.
“Oh, Gerty! and you believe all this farrago?” sighed Sarah, despairingly.
“You’re only jealous because you haven’t such a lover yourself,” retorted Gerty, frowning under her curls like a lovely, willful child. And then Sarah Willis abandoned the task of remonstrance. But for all that, the thought of Frank Tryon’s heart-break lay sore and heavy at her inmost soul.
“She may go to ruin her own way,” thought Sarah; “but she shall not drag him down with her. Montressor–Montressor I know I have heard the name somewhere–it carries a disagreeable remembrance with it. I remember now! It was a Mr. Montressor that boarded so long with Aunt Polly Sharker, and then went away without settling his score. George Gordon Montressor! that was the name! I’ll go see Aunt Polly this very night. I can easily get there on the train by 9 o’clock, and back again in time for work tomorrow morning. And if there is anything to be found out, I’ll find it! Francis Tryon was good to me once, and I shall never forget it.”
***
“Can I speak to you tonight, Gerty?”
Gerty Fane was hurrying away from the great workroom where the buzz of wheels was gradually decreasing, and the girls were beginning to look for their hats and shawls, when Francis Tryon advanced toward her.
“No!” she retorted, petulantly. “I’m in a hurry!”
“Then I will walk along toward home with you.”
“I’d rather go alone!”
He cast one sad, reproachful glance toward her and stepped back. “Gerty—” began he.
“I’m not Gerty, I’m Miss Fane.” said the girl, half defiant, half frightened. “And I’ll trouble you to keep your distance.”
And away she flew like an arrow out of a bow. She was just in time for the train that paused a minute at the solitary little depot in the woods, and, leaning back in the seat, reflected joyfully that she was already beginning the elopement.
Pretty, blossom-like little fool! How little had she calculated the end of her rash experiment! And yet to her it seemed that she was beginning to live romance.
It was toward 10 o’clock at night when the train stopped at Pittsburg. The Hapgood house was nearly opposite the terminus, a comfortable, old-fashioned wooden structure, its windows gleaming with lights, like the shine of friendly eyes; and thither Gerty bent her footsteps.

“Oh!” said the plump, motherly landlady, “it’s the young lady from Wardham village as a room was engaged for by Mr. Montressor. Number 16. Yes, it’s all right, Miss. Please to walk up. The lady’s there, waiting for you!”
“The lady?”
“Mrs. Montressor, you know,” said the landlady. “And a fine, handsome person she is, only a trifle stout, as we all is, when we gets toward 40 odd.”
Gerty stood as still and white as if she was turned to stone.
“His mother, I suppose,” she told herself, regaining courage. “How kind of him to send her here, to welcome me!”
At the same moment the landlady flung open the door of number 16, a small cozy room, with a bright lamp burning on the table.
“It’s the young lady, mem!” said she, dipping a courtesy.
And a fat woman, gayly dressed in cotton velvet and imitation lace, waddled forward.
“Oh!” said she, “good evening, my dear. So you’re the gal that’s goin’ to marry my husband?”
“Your husband?” echoed Gerty.
“Don’t be alarmed,” said the fat woman, busying herself with the strings of Gerty’s hat. “We was divorced eight years ago. He couldn’t support me, and I wasn’t goin’ to support him. He’s had two wives since. But don’t worry. He’s got bills from both of ’em. One of ’em drank, and t’ other one said he drank. I guess they was both true! And now he’s shined up to you! Well. I guess you’ll get enough of him: a great lazy, drinkin’ vagabond, as was raised in Pork Hill workhouse, and served two terms in the penitentiary for forgin’ Lawyer Odderley’s name to a check for $50.”
Gerty stood pale and shocked.
“It is false!” gasped she. “You are inventing these lies to estrange me from him.”
“Bless your heart, my dear, no I ain’t,” said the fat woman, with a comfortable, chuckling laugh. “What should I gain by estrangin’ you from him? I don’t care. I’ve my marriage lines to show, and my papers of divorce, and Gordy’s welcome to marry as many new wives as Bluebeard, for all I care.”
Gerty turned to the landlady.
“How early does the first train for Wardham start in the morning,” said she.
“At 4 o’clock,” said the landlady. The railroad hands go down on it.” “So will I.” said Gerty. “And how about the gentleman as engaged the rooms?” questioned Mrs. Hapgood.
“I’ll never speak to him again!” said Gerty, with spirit.

She was at her machine the next morning, as usual, and when Frank Tryon came past she looked up shyly into his face.
“Please, Mr. Tryon,” she said, “won’t you forgive me for being so cross with you last night? I–I am very sorry. And if you can walk home with me tonight–”
That was enough for Mr. Tryon. They were engaged before the moon was an hour high that night!
For Gerty’s fancy could not endure the idea of being fourth or fifth wife to a man who had once graced the penitentiary, and Mr. Montressor never beheld his pretty fiancee again.
And Sarah Willis kept the secret of her elopement well.
The Shippensburg [PA] Chronicle 12 September 1889: p. 1

Mrs Daffodil’s Aide-memoire: A spoilt little beauty she may be, but Gerty is far from harmless. Her engagement to Mr Tryon is one best characterised as “rebound.” Mrs Daffodil wonders if there had not been quite so many Mrs Montressors–if she had been, say, only the second wife–if she would have gone through with the elopement. One fears that Gerty will continue to sigh over yellow-covered novels and long for perilous adventures. Sooner than later she will tire of the faithful Mr Tryon for whom she does not care a fig and run off with some plausible, Byronesque drummer with a wife and five children back in Buffalo. If there was any justice in this world, Mr Tryon, hurt by Gerty’s refusal, would have walked home with Sarah Willis and immediately awakened to her kindliness and goodness, recognising that Gerty’s dew-blue eyes and hair of braided sunshine concealed a cankered heart. One does not like to dwell on the sequel to this “happy ending.”