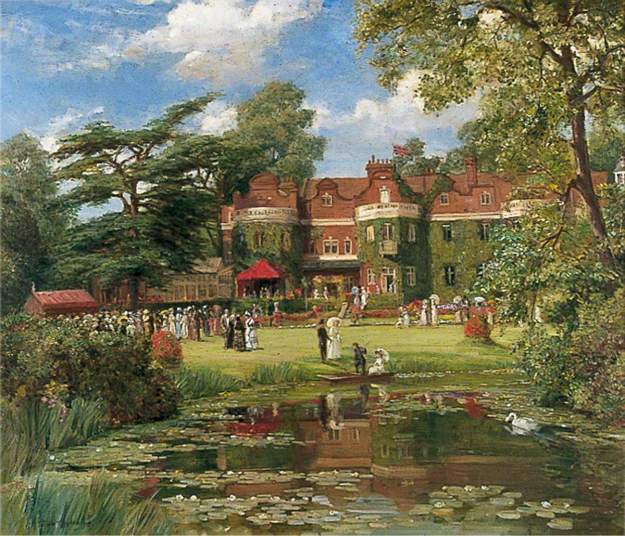 My sister was with us from the East—we always spell that word with a capital in California—and I wanted to have her meet some of our young lady acquaintances. I must give a party, but how?

I took mental account of the available space in our cottage; parlor so small that half a dozen people made it seem crowded; dining room still smaller; ten by twelve bedroom, and no folding doors. I went out on the piazza and again took account of stock: A fifty-foot city lot on a quiet street. with near neighbors on either side; small lawn, perhaps thirty-five by twenty feet; narrow piazza running across the front of the house, covered with vines at one end. Not very promising, surely. But I set my wits to work and enlisted the wits and the muscles of the Capable Man, and the remembrance of the beautiful tea-garden we evolved has been a joy ever since.

First, a rope was fastened to the corner of the house about eight feet from the ground: this was made to encircle the entire lawn, being fastened at the outer corners to stout poles which were kept in place by means of guy ropes tied to stakes outside. A second rope three feet from the ground was similarly fastened, running around as far as the walk at the side, leaving a gateway.

Graceful, feathery date palm fronds from ten to twelve feet high were then made fast to the ropes to form a screen all around, the heavy ends resting on the ground. Had we lived in Massachusetts, we might have used willow or some other feathery branches.

The pine tree in the next yard shaded part of our lawn, and with my neighbor’s kind permission a hammock was stretched from it to the corner of the piazza, and another from the other corner to our own pine tree.

The blossoms of the rich pinkish purple bourgainvillias vine on the porch gave the touch of flower color needed with the green, and a huge Japanese umbrella was placed in the center of the lawn.

The vine-covered end of the piazza was fitted up for a dressing room, with bureau, hat rack and table, while the open end was furnished with a small couch, cushions and a small table of ferns. A large rug was laid over the steps, which were also furnished with cushions along the sides. An old wagon seat covered with a carriage robe was placed against the trunk of the pine tree, and rugs, easy chairs and cushions were scattered over the lawn.

California skies never fail us in summer; I could be sure of plenty of sunshine. The guests had been invited to an outdoor party, and no doubt came with much wonderment as to how I could entertain an outdoor party.

Each was given a little booklet with dark green covers, shaped like an ivy leaf and with pencil attached. Inside was a guessing contest containing questions about trees, such as “What tree would bark?” “What tree would mew?” etc.

The last page was reserved for a contest of a different sort; the guests were asked to guess the number of tiny shells in a small jar, the one guessing nearest receiving as many little gilt stars as there were persons present, the next one next, and so on, the one guessing widest of the mark receiving but one. These were pasted on the booklets by way of decoration.

I suppose the refreshments should have been tea and wafers, but the day being warm, ice cream and cake were served instead. When the afternoon was over, we were so pleased with our success that we resolved to give another party the next day, this time for the neighbors who had so kindly helped us out in our plans of the day before. Our only regret on looking back to our charming tea-garden is that we neglected to have it photographed as we intended.

Mrs Daffodil’s Aide-memoire:  The garden party under a marquee, is, of course, a recognised fixture of English life. However, in the States, this form of entertainment has a more dubious record, being plagued by weather and insects. Some form of comprehensive coverage was needed. This 1902 author recommended a “veranda tea,” which sounds very like a screened version of the tea-garden above.

The garden party has never flourished in this country. It has a vogue, perhaps, for a season in some district where mosquitoes and gnats are not troublesome and where the trees are guaranteed not to drop squirming caterpillars on the heads or into the beverages or ices of the ladies. Besides, the weather man is an unreliable individual, and his firmest assurance that the neighborhood may anticipate nothing but cerulean skies and balmy breezes for at least a week may be sadly belied by the tornado that springs up as if from nowhere. A garden party that opens to the singing of birds and the smile of the sun may end to the accompaniment of thunder and the cold, steady beat of the drenching rain. Then too, garden parties are hard on the delicate complexions of American women. English women are indifferent to tan, but the American hates to think that above her fairylike frock she displays the face of a broiled lobster.

Now, the veranda tea has none of these disadvantages. In the shade of that roofed retreat there is no menace to the complexion, and one may wear her prettiest white gown or most fascinating organdie. Disturbing insects cannot penetrate behind the screens, and the war of the elements without can introduce no disturbing effect.

The “back-yard” party, was also in vogue, for the budget-conscious young:

Any kind of outdoor entertainment is preferable in summer to staying in the house, so, for that reason, several young women who cannot go to the seashore or mountains for the “heated term” have inaugurated what they call “back-yard parties” in the spaces in the rear of their homes. These have been made attractive enough to warrant asking their friends to spend the evening there.

At one house in town in particular, the yard has been turned into a really lovely garden. Ivy and other climbing plants have been planted along the fences and now completely cover them. The center is a grass plot, and around is a border of gay blooming geraniums and other hardy flowers. Benches, garden chairs and tables are placed here and there. A low cot bed, with rug and cushions, forms a divan. At night, with Japanese lanterns strung across and little lamps hung among the ivy, the effect is surprisingly pretty.

The daughter of the house finds her friends more than ready to accept her invitations, and the open air entertainment is thoroughly enjoyed. Sometimes they play games, or they have music of banjo or mandolin, and sing college songs. [One wonders if the neighbours were pleased with the repertoire.] The men, of course, have permission to smoke, and the cold lemonade, ices and cakes are especially delicious served under these unusual and Informal conditions. Try it; it is well worth the trouble.

Of course, there were always guests who did not quite grasp the concept:

“I’ve got an invite to Mrs. Blugore’s garden party, and she says they’re going to dine Al Fresco.”