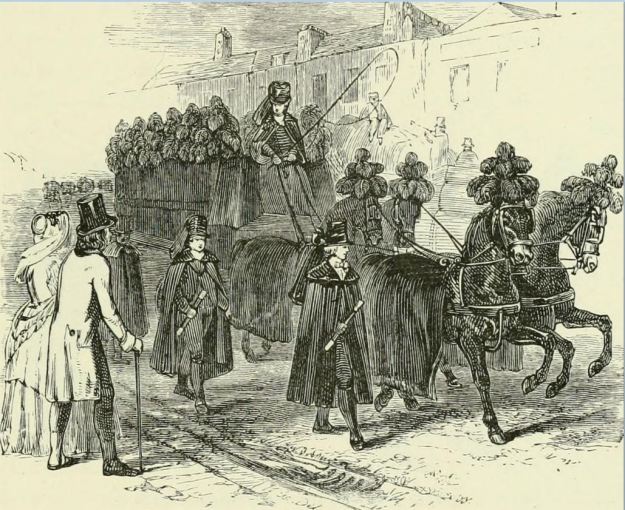 Bungay, the real-estate agent over at Pencader, suspected that Mrs. Bungay didn’t care as much for him as she ought to. So one day he went up to the city after leaving word that he would be gone two or three days. While there he arranged with a friend to send a telegram to his wife, at a certain hour, announcing that he had been run over on the railroad and killed. Then Bungay came home, and, slipping into the house unperceived, he secreted himself in the closet in the sitting-room, to await the arrival of the telegram and to see how Mrs. Bungay took it. After a while it came, and he saw the servant-girl give it to his wife. She opened it, and as she read it she gave one little start. Then Bungay saw a smile gradually overspread her features. She ran for the girl, and when the servant came Mrs. Bungay said to her:

“Mary, Mr. Bungay’s been killed. I’ve just got the news. I reckon I’ll have to put on black for him, though I hate to give up my new bonnet for mourning. You just go round to the milliner’s and ask her to fetch me up some of the latest styles of widow’s bonnets, and tie a bunch of crape on the door, and then bring the undertaker here.”

While Mrs. Bungay was waiting she smiled continually, and once or twice she danced around the room, and stood in front of the looking-glass, and Bungay heard her murmur to herself:

“I ain’t such a bad-looking woman, either. Wonder what James will think of me?”

“James!” thought Bungay, as his widow took her seat and sang softly, as if she felt particularly happy. “Who’n the thunder’s James? She certainly can’t mean that infamous old undertaker, Toombs? His name’s James, and he’s a widower; but its preposterous to suppose that she cares for him, or is going to prowl after any man for a husband as quick as this.”

While he brooded, in horror, over the thought, Mr. Toombs arrived. The widow said:

“Mr. Toombs, Bungay is dead; run over by a locomotive and chopped all up.”

“Very sorry to hear it, madam; I sympathize with you in your affliction.”

“Thank you; it is pretty sad. But I don’t worry much. Bungay was a poor sort of a man to get along with, and now that he’s gone I’m going to stand it without crying my eyes out. We’ll have to bury him, I s’pose, though?”

“That is the usual thing to do in such cases.”

“Well, I want you to ’tend to it for me. I reckon l the Coroner ’ill have to sit on him first. But when they get through, if you’ll just collect the pieces and shake him into some kind of a bag and pack him into a coffin, I’ll be obliged.”

“Oh, ’most any day. P’rhaps the sooner the better, so’s we can have it over. It’ll save expense, too, by taking less ice. I don’t want to spend much money on it, Mr. Toombs. Rig him up some kind of a cheap coffin, and mark his name on it with a brush, and hurry him with as little fuss as possible. I’ll come along with a couple of friends; and we’ll walk. No carriages. Times are too hard.”

“And, Mr. Toombs, there is another matter. Mr. Bungay’s life was insured for about twenty thousand dollars, and I want to get it as soon as possible, and when I get it I shall think of marrying again.”

“Yes; and can you think of anybody who’ll suit me?”

“I dunno. I might. Twenty thousand you say he left?”

“Twenty thousand; yes. Now, Mr. Toombs, you’ll think me bold, but I only tell the honest truth when I say that I prefer a widower, and a man who is about middle-age, and in some business connected with cemeteries.”

“How would an undertaker suit you?”

“I think very well, if I could find one, I often told Bungay that I wished he was an undertaker.”

“Well, Mrs. Bungay, it’s a little kinder sudden; I haven’t thought much about it; and old Bungay’s hardly got fairly settled in the world of the hereafter; but business is business, and if you must have an undertaker to love you and look after that life insurance money, it appears to me that I am just about that kind of a man. Will you take me?”

James was just about to fold her, when Bungay, white with rage, burst from the closet, and exclaimed:

“Unhand her, villain! Touch that woman and you die! Leave this house at once, or I’ll brain you with the poker! And as for you. Mrs. Bungay, you can pack up your duds and quit. I’ve done with you; I know now that you are a cold-hearted, faithless, abominable wretch! Go, and go at once! I did this to try you, and my eyes are opened.”

“I know you did, and I concluded to pay you in your own coin.”

“It’s true anyhow. You told Mr. Magill you were going to do it, and he told me.”

“When you are really dead I will be a good deal more sorry, provided you don’t make such a fool of yourself while you’re alive.”

“You will? You will really be sorry?”

“And you won’t marry Toombs? Where is that man Toombs? By George, I’ll go for him now! He was mighty hungry for that life insurance money! I’ll step around and kick him at once while I’m mad. We’ll talk this matter over when I come back.”

Then Bungay left to call upon Toombs, and when he returned he dropped the subject. He has drawn up his will so that his wife is cut off with a shilling if she employs Toombs as the undertaker.

The Elocutionist’s Journal. A Repository of the Choicest Standard and Current Pieces for Readings and Declamations.June 1882: p. 14

Mrs Daffodil’s Aide-memoire: One can only imagine the hilarity when this was presented as a parlour recitation.

Jealous husbands shamming death are nothing new in the annals of fiction as we previously saw in “Mr Mathias Rises from the Grave,” And a very sick man thought, as Mr Bungay did, that his wife was utterly heartless because he overheard her discussing not wearing the appropriate mourning.

Perhaps the best we can say is that many wives lamented their late lords and masters rather less than those gentlemen expected.

Jones (sick): My dear, what will you do if I should die?

Mrs. Jones: Is your insurance all paid up?”

Mrs. Jones: I’d have the loveliest mourning gown that’s ever been seen on this street!