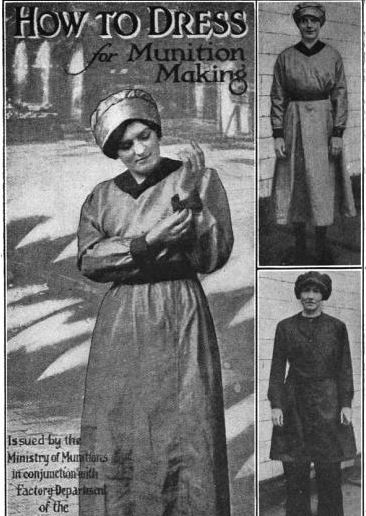 Utterly worn out, she slept. At the latter end of a fortnight’s night shift at a munition factory she slept.

When she got up at four-o’clock that afternoon — after her six hours’ so-called “night’s rest,” she felt ill; but she had her bath, dressed, found she could not eat her five-o’clock dinner, yet she must catch the quarter-to-six train for Woolwich, as they were shorthanded, many overseers and forewomen being away owing to “flu.” Gallantly struggling to do her duty to her country, after two years’ arsenal work, this soldier- woman was back in her “shop “as usual by 7 p.m. It was a freezing night, the journey was dark in the cold third-class railway carriage filled with sixteen weary people, whose day’s work was over just as hers was about to begin. The rain drizzled through the fog, and the whole world looked drear.

Worn out with the dark, the chilliness, yet stuffiness of the atmosphere of her “shop,” the lack of food — by eleven o’clock our little munition worker was so utterly done up that she went to her head man and asked to be let off at the “half-night.”

She was a steady and constant worker, always at her post like a sentinel at his box.

She was quick. She caught the 11.15 train back to town, and sank into a corner of a thinly filled compartment.

Later, rousing herself, chilled to the bone, she realized she was in total darkness — deep, dark, foggy darkness — alone in a third-class railway carriage.

Where was she? Fearing to get out, knowing the danger of slipping on to the roadway and of passing engines, she opened the window, to find nothing but a blank wall before her. Opening the other window, she saw the glint of railway lines, and in the distance a little dim red light.

She called out. No one answered.

She called a third time. And a voice replied.

Gradually the little lamp came nearer. At last it stood below the carriage door.

“On a siding at Cannon Street Station.”

So out she came to the accompaniment of grunts from the kindly man, who condescended to light her along the rail track.

The station was all shut up. The last train had gone.

“Is there a waiting-room?” she asked.

“Is there any hotel where I can go? “

“But I live miles from here; I don’t know the City, I live beyond Baker Street Station.”

“I can’t help that,” he replied. “If you want to get there you must walk.”

Finally, he escorted her to the door of the great station, and when she inquired the road, remarked, “Just walk west.”

Thoroughly chilled, having been eighteen hours without food, feeling absolutely ill, she started on that terrible night of fog and drizzle to walk west.

The tears rolled down her cheeks, and a great lump in her throat nearly choked her, but she struggled on. The darkness seemed oppressive, the distance interminable.

At last she met two postmen. She explained her woes.

“Where am I? “she exclaimed.

“What am I to do? “she reiterated.

“There is nothing to do at this hour of the night, miss, but walk,” they smilingly replied.

They were polite but hopeless. On she trudged.

Joy of joys. Before her she saw a hansom cab —actually an old-fashioned, war-time resuscitated hansom  cab. Up to the driver she went, and said sweetly, “I haven’t very much money with me, only 3s. 6d.;  but I can get more when I get home.”

He refused to drive her. No persuasion availed. He flatly refused. So she trudged on again.

At last, in the dim light, she realized that the building opposite must be the Post Office. It was then 1.30 a.m.

The street was utterly deserted, as the City alone can be. That City — the greatest city in the world —which throbbed with bustling life during the working hours of day, was empty and lonely.

A policeman was standing at his beat.

Feeling ready to drop, with tears rolling down her face, she related her story of woe.

She really found human consolation in the kindly words of the policeman, and supported herself against a large red letter-box. She felt content and less lonesome.

She does not know how long she stood there: but suddenly the gentleman-in-blue dived across the street, put out both his arms, and called “Halt!”

A motor-car had sprung from nowhere. He had barred its progress.

“Could you give this lady a lift?” he said. “She works at Woolwich, and is dead done.”

“Certainly,” replied the driver of the car — and the midnight driver happened to be a lady.

The car was full of Tommies, who made room for the weary munition worker, and the car proved to be one belonging to the Y.M.C.A. on its way to headquarters at Tottenham Court Road.

The comfort of the seat, the warmth of the welcome of the Tommies cheered her, and when she got to head-quarters she stepped out, thanked them all, and prepared to walk two further miles to her flat.

“Oh!” said the chauffeuse, “I will gladly run you along there,” and she did.

As they parted on the doorstep of the cosy flat that its owner had never seen even on Sundays except to sleep in, the war-worker thanked her warmly, and said— “I always go to the factory every day with 5s. in my purse; that pays my fares and canteen, and although  I am a forewoman I only earn 30d. a week, so I should be in a sorry plight but for my own income. Some of the girls under me, who do piecework, of course earn far more than I do. I have only 3s. 6d. left in my purse to-day from my railway fares. Would you take it and drop it in the Y.M.C.A. box for me? If it was fifty times that sum, it would hardly express my thanks for your kindly help to-night.”

And the two women workers, the one a chauffeuse, the other a factory forewoman, shook hands beneath a green painted, almost obliterated, street light at 2.30 a.m. on a bitter, sleety March morning, both high-born women — representative of others — who have left their comfortable homes to do their bit for the country’s good.

The little munition worker crawled upstairs, unlocked her door. All was cold and still. She was not expected till 8.30, nearly six hours later, so no fire or breakfast awaited her.

The lick of a warm tongue and a gentle rub of a little black nose was the gleeful “How do you do?” of her dog. Comforted by his greeting, our little war-worker sank into bed. But she was up again that afternoon in time to catch that 5.45 train back to the factory for another twelve hours’ night shift, with three hours’ daily travelling.

And that gently reared woman did this for two years and a half to help send munitions to our men at the front.

Was she not a woman-soldier? And didn’t that gentle-born lady deserve a D.S.O.?

Mrs Daffodil’s Aide-memoire: One feels sorry for anyone in the grip of la grippe, but if the lady war-worker had her own income, why on earth did she not carry enough money for an emergency cab? We have heard from Mrs Alec-Tweedie before in the poignant story of A Parlour-maid Goes to War. Mrs Alec-Tweedie was Ethel Brilliana Harley Tweedie, a travel writer and passionate advocate for women’s rights. She shows herself a bit blinkered by the British class system in her comments about “high-born” and “gently reared,” as if the inhabitants of the posher parts of town were to be specially commended for doing work  considered the exclusive provenance of the “lower classes.” Her book might be classed as propaganda, as it seems designed to inspire women to leave their comfortable homes and join the war effort. However, she makes an important point that the wages paid to female war workers were absurdly low, especially considering the long hours, the dangers from explosion and exposure to toxic chemicals.  And she rightfully considers the workers women-soldiers, doing important work and deserving of recognition, as we remember all of the Fallen on this Remembrance Sunday.