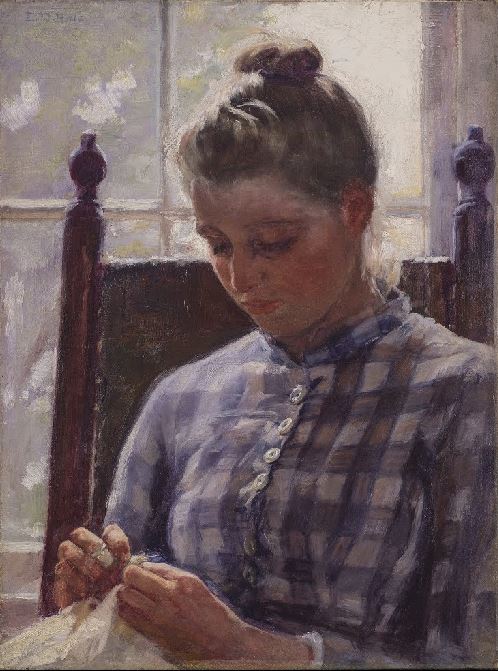 Although Monday was, Mrs Daffodil is reliably informed,  “Earth Day,” a time to take stock of how we use the resources of the planet, there is never a bad day to reflect on consumption and its consequences. There has been a societal move against “fast fashion” and a resurgence of “Make Do and Mend.”  Mrs Daffodil will, therefore, “recycle” several posts on the subject of domestic economy in dress, on the clever makers-over of tired garments, and the second-hand clothing trade.

One would go far before one would discover a more ingenious clan than these Southern Ohio ladies and their cunning tricks of skillful fingers.

Although this lady, who traded in second-hand silks and this gentleman, who prospered in left-over laundry, are an inspiration to all of us.

Some clever gentlemen took a leaf from the ladies’ domestic economy books and learned to update and repair their wardrobes.

A fascinating tour of a 19th-century “recycling” firm and an examination of the “rag trade.”

The second-hand trade was a boon to actresses, and the buying, selling, and hiring of costly gowns worn by the Four Hundred, was a practice well-known to the upper echelons of Society.

The second-hand clothing trade extended even unto royalty, as we see in this peep at Queen Victoria’s stockings.

One of Mrs Daffodil’s heroines is this resourceful lady, who set herself up as a “Dress Doctor,” long before Hollywood costumer Edith Head co-opted that title.

Of course, selling one’s evening dresses involve some unwitting “recycling,” as this lady found to her dismay:

Not long ago (write “X and Z” in the Globe) a lady in dealing with the proprietress of a second-hand clothing business, sold to her several evening dresses, which were perfectly fresh and good, but which she could not wear again, as her friends knew them too well. They had probably been worn three times each. The second-hand wardrobe lady remarked, by the way, that all her purchases were for the colonies. Seems odd, does it not? But to return. A few days after the gowns were sold their original owner missed a very pretty old-fashioned diamond clasp, and, inquiring of her maid, discovered to her tribulation that it was in one of the evening dresses she had sold. “Sewn firm on the left shoulder, my lady,” quoth the maid. She proceeded diplomatically to work, sent the maid to the shop, and, in consequence of her operations there, became again the possessor of her discarded gown at exactly seven times the price she had sold it for. The diamond clasp was still in it, its safety being due to proximity to a mass of crystal trimming which formed an epaulette, the clasp having been added with a view to making the whole mass look “good.” 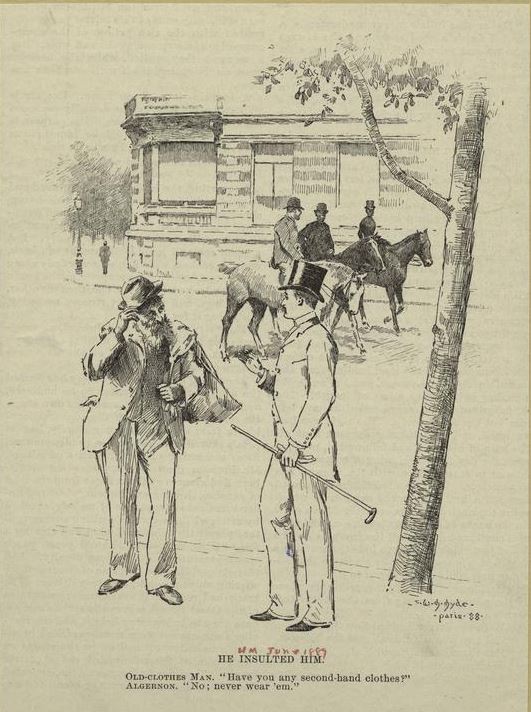 MEN OF FASHION WHO APPEAR IN BORROWED FINERY

Secrets of the Business Disclosed

The “Change Act” and the Economy.

A reporter desirous of obtaining some information in regard to the old clothes trade in Brooklyn called on a local dealer. The reporter’s obliging informant was found surrounded by huge piles of clothing. He was intelligent and seemed to thoroughly understand his business. After making the reporter promise not to mention his name, he said:

“At certain seasons of the year the old clothes business is better than at others. More trade is done during April than in almost all the other months of the year put together. In April, gentlemen shed the clothes worn all winter and don spring attire. The clothing that has been worn in cold weather is, of course, unfit to wear during the heated term, and is usually pretty well used up. The prudent man, rather than put his winter clothes away, and in the fall take them out moth-eaten, sells them. I know men who can well afford a dozen suits, but who have none other but the one on their back. When they get a new one the old suit is sold or given away. It seems strange, but rough, common clothes are more valuable to dealers than fine fabrics. Fine broadcloth suits are not salable when they become a little worn. Much of our trade is done with poor people, who prefer rough to fine clothing.”

“Are the clothes bought by Brooklyn dealers all salable here again?”

“Oh, no; a big trade is, of course, done with residents, but a larger part of the old clothes purchased are sent south or to Ireland….In former years and during the famines, business with the Emerald Isle was brisk. Many strange and incredible scenes are often enacted in old clothes dealers’ shops. There is one branch of the business which I don’t think is done so much here as in New York. This is called the change act. Chatham street and the Bowery contain many dealers who make a specialty of the change trade.

“The change act consists of changing a good suit of clothes for an inferior one, and in receiving a sum of money as an equivalent for the difference in value of the two suits. When a man is broke he will do anything to get money, and if he has a good suit and knows the ropes, he soon disposes of his own good clothes for some of inferior quality. For instance, if a man enters my place with a $40 suit of clothes on his back, and I trade him one worth $10, I can well afford to give him $5 or $8 cash to boot. Some fashionable gentlemen who are seen in a dozen different suits each month own but one.

“The manner in which they are enabled to cut a swell is as follows: Some old clothes dealers do a pawnbroking business in a mild way. If a man has a good suit he can, by paying a small sum, always exchange it for one of equal quality, and still not lose all ownership in his original suit. After he has worn the suit hired a few days he can, by paying a sum, wear still another suit. This arrangement can be continued indefinitely, and finally the lessee, if he desires, can have returned to him his original suit. I have one customer, an impecunious young man who is well known in society. If he is going out in the evening and wishes to appear in full dress, he comes here, leaves the suit of clothes he has been wearing and dons one of my dress suits. In the early morning the young man again appears, takes off the dress suit and puts on his own clothes. For the accommodation I charge only a small fee.”

Mrs Daffodil’s Aide-memoire: Mrs Daffodil has reported before on the “rag” trade, the “misfit clothiers,” as well as the second-hand market in ladies’ clothing, particularly patronised by actresses. Why should the gentlemen not take advantage of the old-clothes market to refresh their wardrobes? It sounds an easy and pleasant trade. Yet, something always comes along to spoil the fun; in this case, the Great War:

There is great mourning among the “hand-me-down” dealers. The marts where the impecunious were smartly endowed with West End “misfits” have closed down. “We cannot get the stuff,” is the cry of the beady-eyed salesman with the crisped hair who lurks mournfully behind a deserted counter. The war affects the second hand clothing trade because, you see, the young knut worn cast-off raiment was the mainstay of the business is now in khaki. He has not troubled his tailor in the matter of civilian clothing for many moons. Formerly a brisk trade was done in the morning coats and lounge suits discarded by young and fastidious officers. These were eagerly bought up by City clerks and others whose means were not equal to their taste in attire. Now, alas, they must dress as they can afford! Harper’s Bazaar February 1916

All that's weird in Oz.

A haunting we will go...