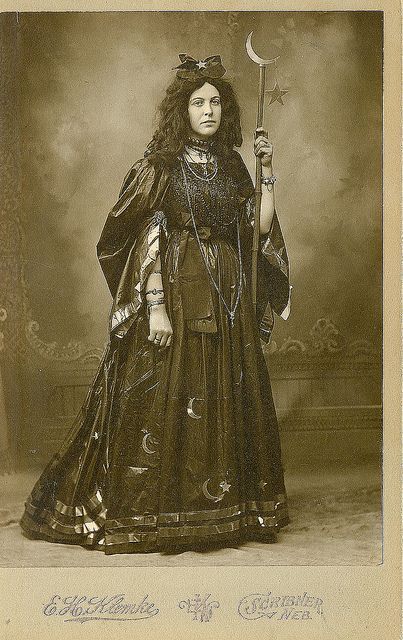 One of the most pleasant social affairs is a moon party. This is the sort of entertainment to give on Halloween (or Thanksgiving) when the harvest moon is in evidence.

Those who are willing to go to some trouble in preparation for the function will find in a moon party something out of the ordinary.

For invitations use colored cards with silver or white moons ferescent or full) on them. Write on the cards the following or some other verse:

Dear friends, this greeting brings to you

To join with us on Halloween

Moons of every description are to be used in decorating—full, crescent, de-crescent, half and gibbous. These may be made of silver or white paper. They may hang from ribbons or cords and may be festooned all about.

The receiving party may be composed of mythological characters associated with the moon.

The first of these may be the “moon maker” (Segende Nah), who cause the moon to issue from a deep well so brilliant that the real moon was concealed by it. His dark blue robe should be covered with bright red moons and he should carry a wand.

Another may represent “Phoebe,” (the moon as the sister of the sun) arrayed in silver and white.

A third may be “Astarte” (the crescent moon), the moon with the crescent horns; and a fourth, “Ashtoreth” (the Phoenician goddess moon), sometimes called the “queen of heaven” (Jeremiah VII: 18).

“Selene” (the moon goddess), may be represented with wings on her shoulders and a scepter in her hands.

“Cynthia” should be included as the moon in the open heaven who “hunts the clouds.”

And from embattled clouds emerging slow

The lighting for the room should simulate moonlight. Vines and branches should be so hung as to throw their shadows on floor and walls.

As the people arrive they are given each a numbered crescent shaped souvenir bearing an appropriate quotation. Those holding the same number are partners in the game of “moon raking.”

“This game it should be explained to those taking part, gets its name from the legend of the farmer who once took a rake to rake the moon from the river under the delusion that it was a cream cheese.

The “moon rakers’ are attached to each other by pairs (by means of a white tape half a yard long. They are instructed to go and rake for the moons (round, white candy tablets), which have been hidden among which is a green cheese (cloth) moon.

The finder is awarded a tiny moonstone.

The fact that the moon rakers are bound together makes it difficult for them to search and adds to the liveliness of the game.

Another interesting game is that of the “man in the moon.” A big, white moon with a man’s face on it is outlined on a dark curtain. Each player essays in turn to pin the eye nearest the place intended for, a small favor being presented to the one who succeeds.

“Jumping over the moon” is another good moon party game. A moon is suspended from a rod held at a certain height and the player who jumps clear over it at the greatest height is the winner.

Cheese sandwiches, crescent in shape are appropriate for refreshments, with moon shaped or star shaped cookies and wafer disks.

Mrs Daffodil’s Aide-memoire: We have Cynthia, but where is the goddess Diana, she of the crescent- moon crown?  It is not as if there is not admirable precedent for the goddess’s use as a fancy-dress character by the highest in the land:  the Empress of the French was said (in this caustic article) to be appearing at a fancy-dress ball in the character of the bare-limbed goddess.

The Empress of the French expected to give a grand fancy ball at her mother’s, the Countess de Montijo’s house, on Friday last, April 27. An exchange brought over by one of the recent steamers, says:

Eugenie, it is announced, will appear as the Goddess of Diana, equipped for the chase, and her dress will be composed of a short skirt of tulle, and of a body of flesh-colored silk, liberally embroidered with diamonds.

A large diamond crescent, and two stars to match, will sparkle on the forehead of the Goddess; the feathers of her arrows will be bedropped with diamonds, as a thread of gossamer with dew, and the pretty little pink boots, that are to give a finish to the costume, will likewise be adorned with precious gems set in anklets of gold. The jewels, some of which, it is said, will be wrenched form the crown, are more important to the costume than at first sight might be imagined. The dress of the Goddess Diana, consisting merely of a short tunic, and what are technically termed “fleshings,” would scarcely be becoming to a lady of high degree, though it might be exceedingly effective on the stage. But add a circle of diamonds to the scanty habiliments, and the standard of propriety is changed at once. Diana’s silver bow may not command much respect; even Diana’s real moon, inasmuch as it costs nothing, may be unheeded; but a Diana, with a crescent of diamonds—diamonds on her boots, diamonds on her arrows—is admissible into the most rigid circles.

The Empress Eugenie was widely regarded as a low-ranking and unsuitable match for the Emperor Napoleon III, an amusing attitude, considering the antecedents of that upstart Bonaparte. The Empress did give a series of extravagant fancy-dress balls in 1860 and called upon her favourite couturier, Charles Frederick Worth for imaginative costumes for her and her guests.  Here is a design for “Diana:” 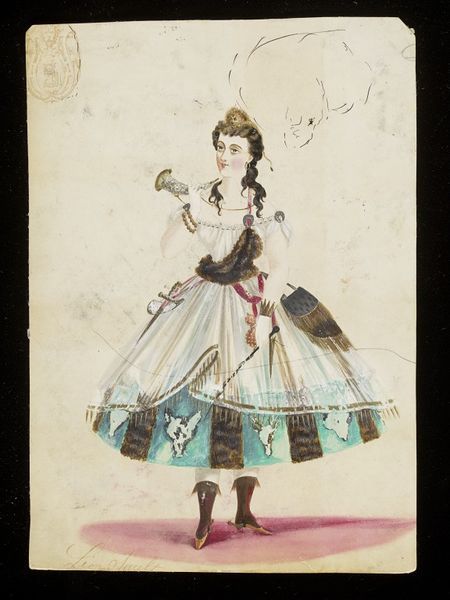 From the Victoria & Albert collections

However, the acerbic tone and the nonsense about wrenching jewels from the Crown make one suspect that this article was a piece of anti-Eugenie propaganda rather than an actual account of a fancy-dress costume.

The “moon-maker” was an 8th-century Arabian magician, also known as Hakim Ben-Hashem. He wore a veil to conceal the brilliance of his eyes, the result of causing a moon to issue from a well and remain visible for a week.