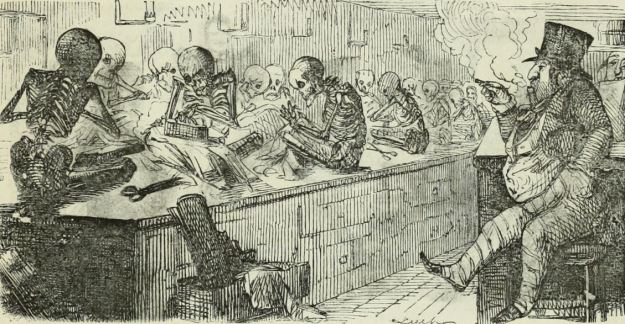 LIVES OF WOMEN WORN OUT ON READY MADE SUITS.

What It Costs to Put “Bargain” Price Marks on Wearing Apparel

Dangers of the “Slop Shop” Trade

The slop shop is the biggest thing in the cheap clothing trade, and the slop shop keepers are the hardest taskmasters of the poor slaves of the metropolis. Competition in the retail clothing business has brought this condition of things about. Besides, the whole system on which the manufacture of cheap clothing is carried on is as bad as it can be, and its continuance is a menace to public health and a danger to the general welfare of the community beside which the much talked-of tenement house manufacture of cigars is nothing.

There are comparatively few clothing factories in New York. Most of what are called such are simply shops where the cloth is cut. It then goes, each sort of garment separately, to the “tailors,” so-called, who have their shops all over the city, but chiefly in the most densely populated tenement house districts and in the very slums. One tailor will take out hundreds or thousands of pairs of pantaloons in a week, another carries off the coats, and the vests go somewhere else. If these men or women have any shops at all they are simply their living rooms in the tenements where they hire girls to come for from nothing to a few dollars a week and work at sewing machines making up the garments. In many instances men instead of girls are hired, especially on heavy work, but in either case the people are crowded as closely as the machine can be put together, often four or five in one small room where all the household lives and all the domestic work is carried on. In these places, reeking with all the vile odors of the tenements, with dirty children crawling over the filthy floors, playing among them by day and sleeping upon them at night, in an atmosphere, in short, of dirt, disease and death, the garments are finally made up.

They may be “finished” —that is, have the buttons put on and the other hand sewing done—in the same place, or this work may be farmed out to still more abject slaves than those who toil over the machines—to women who are prevented by invalid husbands, young children, or other reasons from leaving their homes, and who are therefore obliged to take up for their work whatever pittance the slop shop barons will dole out to them, and trust to charity for enough more to stave off starvation.

In the barren rooms of these lowest of slaves the garments have a change to get a new variety of odors and disease germs. Then they go, most likely, to the button hole factory, where they touch shoulders with similar lots from dozens of other tenement house shops, and when their own odors and germs have thus been amalgamated with the odors and germs of all the tenements for half a mile around, they go back to the original slop shop, and thence in the course of time to the alleged manufacturer, who sells them to a wholesaler, maybe, from whom they go to the retailer, and after all these different hands have taken their toll the general public is invited to come in and look at the wonderful bargains in clothing.

Often they are wonderful bargains, indeed, in spite of the numerous profits that have been made off of them; but if they are cheap it is because women have turned their sinews into thread and their blood into sewing machine oil in the making of them. They are aired and fumigated, and cleansed, maybe, before they are sold, but a man in the business says; “If people knew where those clothes have been they would never buy them.”

Philip Leidesdorff has been in business for eighteen years. His brother is with him now, and they have a buttonhole factory. They take the work after those who get it from the manufactures have made it up and put in the buttonholes for so much a hundred.

“This tenement house work,’” he says, “is the ruin of the clothing business, and worse yet, it’s the ruin of those that work at it. Someday people will wake up to what this cheap clothing business means. Go into some of these tenements and you’ll find in some of the little rooms a whole family living, and three or four girls working at machines all day. They take the goods from the tailor’s and make them up in the rooms where they cook and sleep. Why they use the clothes for bedding, even. If people could see once the vile holes in which the clothing is made up they’d never buy any of it. I wish they could see some of it when it comes here to have the buttonholes put in. It gets aired and cleaned before it is put up for sale.

“The way these people do is to get young girls to come and learn the business. They make them work six weeks for nothing, or, maybe $2 a week for their work, and they pack just as many of them as they can get into one room, along with the children and the cooking and all the rest. That way they make a little money for themselves at the expense of the girls, but it don’t do them much good, for pretty quick the manufacturer grinds down the price another peg, and the more they grind the girls the more the manufacturer grinds them, until nobody is making more than a bare living. The people that take the work out in the country to do are pretty near as bad as the tenement house people for prices, but, of course, they’re cleaner. If it wasn’t for them prices would be a good deal higher in the city. New York is the worst city in the country for sewing women. In Philadelphia, even, they pay them a good deal better. It’s all on account of this tenement house work, and it’ll never be any better till they pass laws making it illegal for more than one machine to be put in an ordinary living room.”

“There’s another thing,” said David Leidesdorff, a brother, “and if cholera or any such disease ever gets a start in this city people will find it out mighty quick. These tenement house factories would spread the disease through the whole country. I’ve always said that if cholera ever got a start in New York I’d drop this business and get out right away, and I’d do it, too. They have a board of health and laws enough here, but I’ve never been in a city yet, and I’ve been all over the world, where they allowed such things as they do here. Only last winter, at a place in a street right near here, the children in a family were sick of small pox in the same room where the clothing was being made up and sent out every day. These people don’t have any more regard for the laws or for other people’s health than they do for their own health, and if you have ever been in any of the holes where they live and work you know how little that is. This whole business of the manufacturer of cheap clothing needs a showing up.” New York Sun

Mrs Daffodil’s Aide-memoire: Mrs Daffodil is fascinated by how the buttonhole factory brothers are well aware of the dire conditions in sweatshops and condemn sweated labour—while benefiting from it. Of course, to-day New York is one of the leading fashion capitals of the world, yet cheap clothes are more prevalent than ever, manufactured  under conditions their purchasers can only guess at.  Enslaved persons toiling in “sweat-shops” may be found, even in many of the world’s most affluent countries. Tragically, plus ça change…

Contagion from textiles has been a consistent theme in world history: Mrs Daffodil cites the plague begun in Eyam by flea-infested fabric from London; a fatal shawl, said to be behind a Russian plague outbreak in 1878, remonstrances about disease in hired mourning clothes, and the ghastly traffic in clothing stolen from corpses. A good deal of the pressure to unionise garment workers arose from fashionable ladies’ fears of contagion in sweated clothing.

To be Relentlessly Informative, “slop shop” comes from “slops,” the full breeches worn by sailors. They could be purchased ready-made and the term came to be attached to establishments selling any  cheap article of clothing.