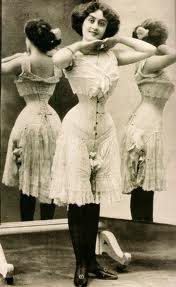 How to Put on a Corset. [From a report on a murder inquest.]

At this juncture the Coroner desired to show the jury the course taken by the ball, and for this purpose produced the corset worn by Mrs. Burkhart at the time of the tragedy. “You see,” said he, and here he drew the corset around his waist with the laces in front! “the ball must have gone in here from behind. No, that can’t be, either, for the doctor says the ball went in in front. Confound it, I’ve got it on wrong. Ah! This way.” (Here the Coroner put the corset on upside down.) “Now, you see,” pointing to the hole in the garment, which rested directly over his hip, “the ball must have gone in here. No, that can’t be it either, or—“

Here Mr. Mather, the handsomest man on the jury, broke in, “Dr. Stillman,” said he, “you’ve got that corset on wrong.”

“Well,” said he. “I’ve been married twice, and I ought to know how to rig a corset.”

“Yes,” said Mr. Mather, “but you don’t. You had it right in the first place. The strings go in front and the ladies clasp them together at the back. Don’t I know? I think I ought to; I’ve been married. If you doubt it, look here (pointing to the fullness at the top). How do you suppose that’s going to be filled up unless you put it on as I suggest?”

“No it don’t,” said Mr. Mather; “that fullness goes somewhere else—this way;” and here Mr. Mather indicated where he thought the fullness ought to go.

Here another juryman discovered that Dr. Stillman had the corset on bottom side up. “Doctor,” said he, “put it on the other way.”

Then the Dr. put it on in reverse order, with the laces in front. This brought the bullet holes directly over the tails of his coat.

“I don’t think,” said Mr. Mather, “that the bullet went in there, Doctor.”

“No, I don’t think it did,” was the reply. “Confound it, it’s mighty funny—six married men in this room and not one that knows how to put on a woman’s corset.”

Here the Chronicle  reporter, who had several sisters and always keeps his eyes open, advanced and convinced Dr. Stillman and Mr. Mather, after much argument, that the laces of the corsage go behind, and that the garment is clasped in front. After this explanation the course of the bullet was readily traced; and found to bear out the explanation afforded by one or two physicians. Jamestown [NY] Journal 8 May 1874: p. 7

Mrs Daffodil’s Aide-memoire: The victim was Mrs Harriet “Hattie” Burkhart or Burkhardt, shot by Jacob Wilkerson in 1872. Mrs Daffodil has been unable to find  an explanation of the motive for the shooting. The papers of the period are full of stories of ladies, unlike the unfortunate Mrs Burkhart, whose lives were saved by their corsets. For example:

How Kate Rafferty’s Stays Caused a Bullet to Glance

New York, April 7. Kate Rafferty, a domestic, employed by William Burns at No. 328 East Thirty-third Street, probably owes her life to her corset. She was sitting at a back window on the first floor yesterday afternoon, when she was startled by the report of a pistol. There was a crash of glass and she felt a sharp pain in her back. She screamed, and the son of her employer went to her aid. He found her bleeding from a bullet wound just beneath the left shoulder blade. Examination showed that the bullet had struck a steel in her corset, and had glanced aside, inflicting only a slight flesh wound. The police believe the shot to have been fired by some careless boy. St. Louis [MO] Republic 8 April 1896: p. 1

A CORSET STEEL SAVED THIS WOMAN FROM DEATH

Franklin, Pa., Oct. 13. Mrs. Elia Zone of Woodcock owes her life to her corset steel. She was on her way to Meadville and passed a man carrying a rifle. After he had gone some distance the man attempted to load his gun, with the result that a cartridge was accidentally discharged. The ball struck Mrs. Zone in the side; she gave a scream and the man ran toward her. An examination disclosed the fact that the bullet had been deflected by the steel in her corset. But for that she would undoubtedly have received a fatal wound. Boston [MA] Journal 14 October 1900: p. 2

On the other hand…

SAWING HIS WAY TO LIBERTY

Girl Who Gave Prisoner the Corset Steel Informed the Jailer

Vineland, N.J. Dec. 25 “Al” Stevenson, a colored ex-convict, arrested on Saturday on the charge of stealing a wagon-load of farming tools, came near escaping from the Vineland jail. He borrowed a corset steel from Gertrude Wright, in the adjoining steel cage, and was sawing his way to liberty when, at the midnight round of the jailor, Miss Wright informed on him. Stevenson was placed in the dungeon and the informer was given her liberty. Philadelphia [PA] Inquirer 26 December 1899: p. 4