It was supposed at first that London society’s sudden fondness for white hair was only a revolt against colored wigs and dyes, and that it would result in giving Nature a chance at last, ushering in an era of less paint, powder and enamel and maybe a little less artificiality and deception generally. But what really has happened is a manifestation of feminine human nature queer enough to be worthy of the attention of future historians. No sooner was it known among the elect that white hair had become fashionable than young women whose hair scarcely had begun to turn gray got on the track of a Paris chemist who had discovered the trick of making the hair white artificially, and now that chemist is in a fair way of becoming a millionaire.

It was the genuine attractiveness of the “gray-hair” fashion—the fashion led by the smartest American women in London society—that brought about this “white-hair” fad. With their gray hair artistically dressed the beauty of handsome society women well on in the 40’s was much enhanced. Under the influence of softly powdered hair suggestions of wrinkles or little lines about the eyes faded away, leaving the face smooth and round and soft. Mrs. George Cornwallis West (Lady Randolph Churchill), Mrs Jack Leslie and Mrs Moreton Frewen, well known as the three Jerome sisters, and now greater favorites even than when their mother first brought them over from New York, are all in the swim of the latest fashion. Their hair is beautifully and naturally white. Lady Coleridge, widow of the lord chief justice, is another of the white-haired sisterhood. Though not more than 30, Mrs. Hall Walker also wears her hair white ad looks like one of the beautiful marquises painted by Jacquet. So many others in the ultra-smart set followed the fashion that when it began to be known that hair could be whitened artificially there was a rush for the treatment. 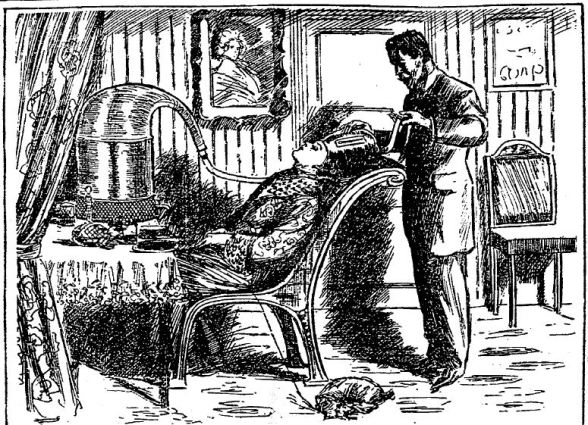 The Infernal Machine for blanching the hair.

Not in London, but in Paris, is the fashionable blanching done, and at the cost of $50 a time. Arriving in the French capital, the woman of fashion must go to the salon of the coiffeur-chemist and there spend the greater part of a day. First her tresses are unfastened, well brushed, cut and singed. Then they are washed with egg julep so that no other chemical preparation shall clash with the fumes which come later. The hair is slowly dried by fanning and the client then passes into a small boudoir, dons a long wrap which covers up her gown and takes a seat in a large arm chair. The coiffeur-chemist places on her head a large bag made of india-rubber, which fits closely around the nape of the neck, up over the ears and across the forehead. This bag is fitted with a thermometer, which the coiffeur watches carefully, as it registers the heat of the fumes which enter the bag by means of a long india-rubber pipe from a wonderful apparatus that contains the chemicals. For exactly one hour and a half is the fair client under this treatment, the chemist busy all the time regulating the fumes and testing results. When the bag is at last taken off the hair that was dark and rich with coloring is found to be as white as snow.

But the patient is not yet free. In another room she reclines upon a couch with her hair spread out like a huge fan upon a table at the head of the couch. In this position she is required to drink milk and to rest for two hours, with her maid in constant attendance At the end of that time her hair is dressed and her maid is instructed how to put on the white paste at the roots when coloring again begins to make its appearance in the growing hair. Warnings are given as to the disastrous effect of using heated curling tongs or wavers on the newly blanched hair, and the superiority of soft white tissue curl papers is impressed on her before the client leaves the salon. What the ultimate effect of this hair-blanching may be time alone will prove. For the present it is considered dainty, chic, extremely smart and becoming, and that to the fashionable woman is more than sufficient.

An Elegant Lady in a Black Hat, Gustave Jacquet. Her hair is probably powdered

Mrs Daffodil’s Aide-memoire:  Mrs Daffodil believes that we may lay the blame for this extraordinary fad squarely at the feet of the late French Queen, Marie Antoinette. The Gilded Age was enamoured of gilded Louis Quatorze furniture, panellings and paintings looted from French chateaus and installed in Newport villas, as well as rather loose versions of “18th century fashions,” a la Dresden Shepherdess fancy dress. Bals poudre were a popular entertainment where participants powdered their hair to aristocratic whiteness and it seems probable that this influence suggested the white-hair fad.

Truly there is nothing new under the fashionable sun, Mrs Daffodil noted articles last year proclaiming that grey hair is “hot” and discussing a fad among the young for dyeing the hair grey or white. For example, there is an entertainer, “Lady Ga Ga,” (who, Mrs Daffodil can confidently assert, does not appear in Debrett’s) who bleached her dark hair to a “sparkly white blond” and posted step-by-step instructions to her followers who wished to imitate her.