It Flaunts From the Bonnet and Adorns the Lapdog.

The Bow and the Bloomer Not Harmonious—A Knot That Means Death to the Big Sleeve.

The bow is fashion’s fad. It has burst into bloom everywhere. It is omnipresent. The old, the young, the rich, the poor, every class and condition of femininity has yielded to its magnetic influence and it has become fashion’s crest for 1895. How long it will reign in the feminine heart remains to be seen. Time only can prove that. Gentle woman has cast her own fair form before its shrine and her lingerie, her hosiery, her garters, her shoes, her gowns, her millinery, her neckwear, her fans, flowers, bon bons, her muff, her parasol, every accessory within and every accessory without–everything seen and everything unseen–all, all are decorated with this recent fad of fashion and the power behind fashion’s throne dares not predict where it may end.

Gentle woman has had other fads. She embroidered her gowns with sunflowers and cat tails at one time and in her hand she carried sunflowers and cat tails; later she worshipped at the shrine of the rose, and still more recently she smiled with favor upon the violet. She bowed before Napoleon and Trilby, but her subjection has never in any instance—no, not in all instances put together—been as complete in its nature as in this reign of the bow.

She has gathered the bow from the bric-a-brac and from the piano legs and tied it about her own anatomy—her neck, her knees, her elbows, her waist; she has perched it upon her shoulders and upon her head, and she has encouraged it in every locality to flaunt and obtrude and intrude and protrude, and in all fabrics, and all hues and combinations of hues, solitary and in flocks. It has fluttered; or it has taken root and simply grown and blossomed, and we submit; we are even reconciled. It is absolute femininity; it is in contrast to the new woman and her bloomers. The bow is stationed at the dividing line of sentiment, and while the fin-de-siècle woman bombards our intelligence with her ideas about advancement there is another kind of woman who sews true, old-time feminine sentiment into bows, and with the latter the she bombards the camp of the enemy.

It is impossible to state whether the bow belongs to us on account of its credentials handed down from the period of the empire; whether its popularity is of Japanese origin, or whether it is simply the result of evolution and a final reaction from the English mode that has been in favor for several years. It is with millinery perhaps that the bow takes the greatest liberties. This winter my lady’s bonnet may be simply a bow, and be-spangled or not, just as she likes. It may be built on a wire foundation worn at the front of her head or at the back, and with an aigrette or a jeweled hat pin to stand sponsors for its claim to being a bonnet. It may dart out in front, or flare at the sides, windmill fashion; it may flare at the side of the hat like a great wing, or it may settle over the hat like a pair of wings. It may be as conspicuous as a weather vane or it may nestle back of a bird whose pinions are spread; it may flare at the back of the hat like a bat shaped bulletin, or it may spread its loops to the four points of the compass. It may be even tied in “a true lover’s knot under the chin.” The Priscilla-like maiden is not now much in evidence. The winter-of-’95 maiden is nothing if not smart in her get-up. One of the most striking features in the Vanderbilt trousseau was a Virot bonnet with nodding plumes and wide strings of French flowered ribbon tied under the chin in this same lover’s knot. 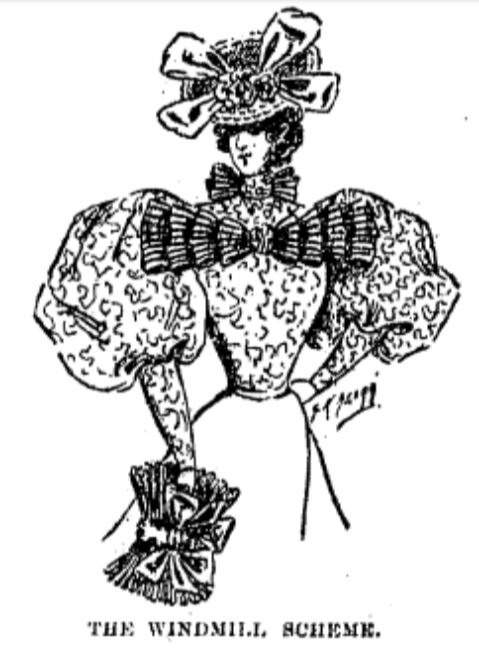 The Marlborough bow, now worn at the back of the neck, is named in honor of this new American duchess. Every dark gown must be lighted up by the Marlborough bow and in most daring colors, too, is this startling neck adornment perpetrated. Deep crimson, magenta, rose pink, apple green, yellow, and all flowered, striped brocaded, and combined with every tint in silk, satin or velvet stripes. It is seen in whatever design in four-inch ribbon the manufacturer can produce. Nothing is too gorgeous for the season’s belle or debutante to utilize in the Marlborough collar and bow. She pins the broad ribbon to place in front, and then winds it about her throat and thoroughly effective is the result produced by the startling and assertive bow she ties at the back of her neck. About the folds of this bow cluster little curls of fluffy hair and the shades in the ribbon blend into her fair pink skin. Woe to her, indeed, when the colors do not harmonize with her complexion and repeat their prevailing tone in her eyes!

The bow does not flock as much as it did. On last season’s gown it spread itself like a cluster of butterflies about the dress skirt. It now confines itself more to unexpected places, and it perches where you are not looking for it. At a bridesmaid’s dinner given last week in New York one of the most fetching toilettes was made of lavender crepon, and on one shoulder rose in perpendicular lines the loops and ends of an assertive bow made of watermelon-pink velvet. The fan carried by the same person wore also the same sort of a bow. 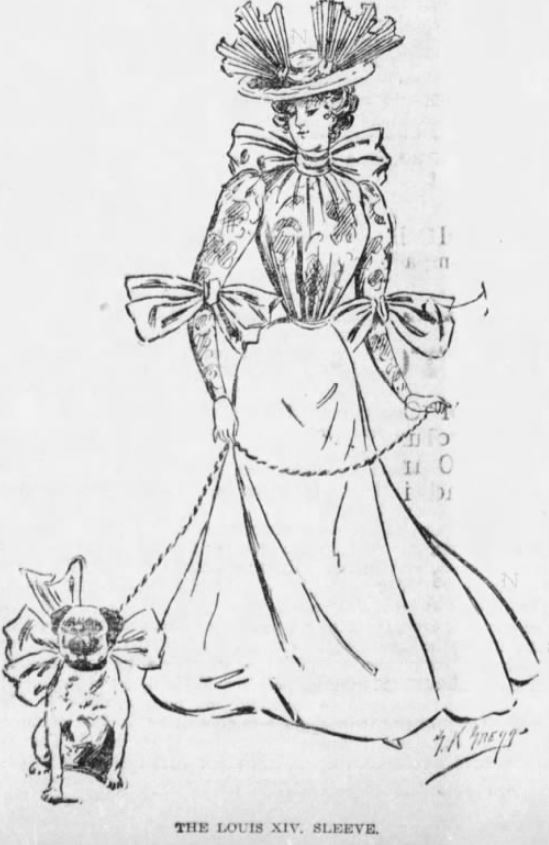 The Louis XIV. bow is absolutely the latest, and, by the way, it is this bow that is to liberate us from the thraldom of the huge sleeve. Already that feature in attire is beginning to lower its flag of supremacy. The sleeve begins to droop, its shirring is now falling down around the curve of the shoulder; later it will enjoy its final inflation in the huge puff at the elbow and last the bow on the elbow, as illustrated here, will supersede it. This will be some time hence, but it will come. Who could have predicted four years ago the sleeve as we now behold it?

The florist and the confectioner estimate the value of the bow to enhance the attractiveness of their goods. Even the modern modish funeral does not escape, and a large bunch of white chrysanthemums may be tied with six-inch white satin ribbon and hung on to the middle handle of the casket.

However important are all these conspicuous bows, the true sentiment of the bow never penetrated deeply into the feminine-heart until fair woman applied it to the decoration of her underwear. Every week after she has trimmed her freshly laundered underwear she is as attractive as lace, dimity, dainty ribbon and the half-hidden curves in all their classic outline can make her.  While the bow adorns her underwear, it will stem the tide that tends toward bloomers. My lady ties her robe de nuit with ribbon bows at the neck and wrists and ties a blossom in with the loops. She sews loops of ribbon in among the flounces of her petticoats; she adorns her garters with huge sachet rosettes of ribbon. She runs a tiny ribbon about the neck of her chemise and she perks bows at the shoulders of that same garment. She loops up her nether garments in festoons with bows that duplicate those on the shoulders and she ties her petticoats and her corset covers to place in the same fascinating manner. ‘Tis safe to assert that while she chooses to wield the sceptre of a ribbon bow, as she does now, the world will continue to submit to feminine rule.

Mrs Daffodil’s Aide-memoire: Most interesting. Mrs Daffodil had no notion that bows would stem the riding tide of bloomerism.  Bloomers, whether on or off the wheel, have always been suspect to certain upright members of society.  In 1891, the Rt. Rev. Arthur Cleveland Coxe, Bishop of the Episcopal Diocese of Western New York, condemned women bicycle-riders, tactlessly stating that they resembled witches on broomsticks. He also objected to what he believed to be the indecorous posture of ladies on the wheel.

Speaking of Bishop Coxe’s objection to women on bicycles, the Boston Herald says: “The Bishop does not appear to understand that the bicycle is not equipped with a side saddle, and that riding astride is the only way to promulgate this interesting vehicle.” We ought not to be surprised, perhaps, if the Boston woman rides astride [or man-fashion as it was called]  a bicycle, but if so she is lonely among her sex in that accomplishment. The women’s bicycles we have seen are provided simply with a seat, and they are no more required to ride astride than sit astride on an ordinary chair. If the good Bishop thinks that women straddle a bicycle as men do theirs he should request some fair Buffalonian to explain to him the difference. Rochester Herald. The Gogebic Advocate [Ironwood, MI] 11 July 1891: p. 2

What the Right Reverend Arthur Cleveland Coxe failed to understand is that there is no surer way to arouse public interest in the novel or indecorous than to denounce it from the pulpit. Bows and Bishops will never ban the bloomer or the bicycle.